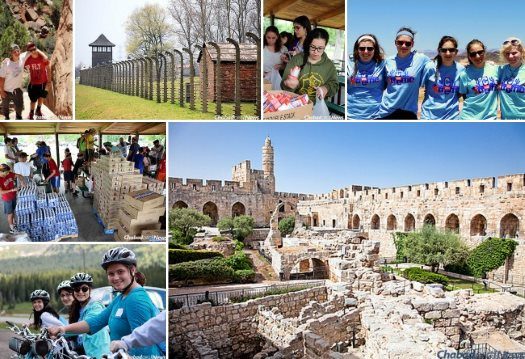 For three weeks this summer, 80 teenagers from across the world will embark on the CTeen “Heritage Quest” trip, traveling through Poland and Israel to explore Jewish history, with focus on the Holocaust.

“We hope that the experience will empower Jewish teens with knowledge,” says Rabbi Mendy Kotlarsky, vice chairman of CTeen International. “Our goal is to give them an educational and meaningful summer trip. We hope that they take away a much stronger connection to their Jewish faith and community, and get more involved once they return home.”

Ranging in age from 15 to 18 (grades nine through 12), the participants are coming from states such as Oregon, Wisconsin, Texas, Nevada and Hawaii, and countries including Canada, England and Sweden. The 40-person trips—one for boys and one for girls—will begin in late July with six days in Poland, and conclude in early August with two weeks of seeing sites and meeting people in Israel.

Their first stop will be the Warsaw Jewish Cemetery, with its 250,000 graves. From there, the group will go to the Warsaw ghetto, with walls still intact. They will also see the Treblinka, Majdanek and Auschwitz-Birkenau concentration camps.

But the emphasis will not just be on sites of sadness and destruction; the goal is to introduce the groundwork of the rich Jewish life that existed in Poland before World War II. To that end, the teens will visit synagogues and the resting places of learned rabbis. Their first Shabbat, set for Poland, is designed to be an uplifting experience, complete with a Jewish walking tour of Krakow that includes stops at the Gothic Wawel Royal Castle and Old Town.

“We want to give our teens an authentic Jewish approach to dealing with tragedy and loss,” explains Rabbi Nachum Rivkin, CTeen summer coordinator, “with a focus on rebuilding and rebirth in the wake of what happened in Europe.”

‘We Are Stronger Now’

To prepare the teens for their upcoming experiences, Rabbi Yossi Lew—co-director of Chabad of Peachtree City in Georgia, who has led five similar trips to Poland and Israel—will give webinars to the teens, counselors and trip leaders. One of the sessions will center on the historical aspects of the Holocaust, including an investigation of institutionalized anti-Semitism; another will focus on the spiritual preparation for the trip, including questions surrounding G‑d’s presence during the Holocaust.

“I hope that the teens will come away with a sense of what anti-Semitism is and what happened there,” says Lew, who is writing a book on the Holocaust. “And specifically, that despite what happened, we’re even stronger now than we were then, and that there’s no end as to what’s able to be achieved today, after the Holocaust.”

As part of the preparatory webinars, Lew provided the counselors with ideas of how to turn the teens’ experiences into something optimistic.

“It’s a very overwhelming trip, and things happen so fast. You’re hit with the horror of the Holocaust, and it can be too difficult, very devastating,” acknowledges Lew. “I want the counselors to be prepared, so that they don’t miss those key moments. And at those specific times when it’s tough, the counselors must encourage kids to get up and speak about their feelings, even if it’s difficult and makes them cry.”

For Rabbi Moshe Rapoport, who will be leading the boys’ group, the three-week trip offers more than any classroom could accomplish.

“I look forward to sharing both the painful and reflective journey to Poland, and the exciting and meaningful trip to Israel. The part that I anticipate the most is confronting the site of the Holocaust,” says Rapoport, program director at the Peltz Center for Jewish Life in Wisconsin. “While it will certainly be a difficult experience, this is a very important part of our life today as Jews, and certainly needs to be something that Jewish teens can confront from a Torah perspective.

That said, he also aims to give the teens “the most powerful, authentic and delicious experience of their lives!”

For Rochel Flikshtein, group leader for the girls, the trip offers teens the opportunity to learn, grow and become forces for goodness in the world.

“My goal is to create an open, nonjudgmental environment without pressure, so that they can get the most out of this journey,” says Flikshtein, who serves as the youth and family program director for Chabad Lubavitch of Delaware. “I want the girls to channel their experiences in a positive way. I hope that they’ll gain a new perspective in the way they look at the world, and that they’ll increase in their excitement, passion and pride in being Jewish.”