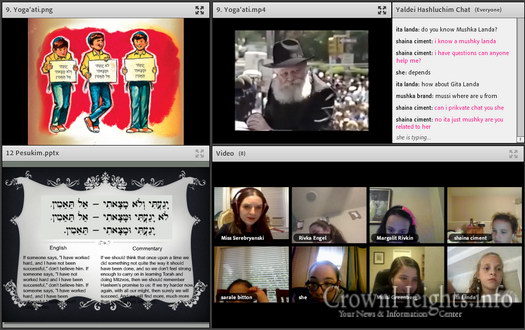 It was forty years ago when the Rebbe launched the 12 pesukim campaign, a move that changed the face of Jewish education. In the next few days, hundreds of young shluchim will be wrapping up an exciting four-week course from MyShliach on the 12 Pesukim.

The 12 pesukim are selected excerpts from the Torah, Gemara, and Tanya that express core principles of Yiddishkeit. The Rebbe declared the year 5736 to be shnas hachinuch (a year dedicated to education), and chose these 12 sayings to be studied by children everywhere. They have since become a fixture of Tzivos Hashem rallies and children get-togethers.

This past Lag Baomer, MyShliach launched a four-week study campaign for yaldei hashluchim on the meaning of the 12 pesukim. Children who participated received tickets in a grand raffle with eight incredible prizes. To qualify, all children had to do was receive a 70% mark on the bi-weekly online quiz.

In addition, every child who received over 85% on their quizzes automatically qualified for a brand new MP3 player pre-filled with beautiful chasidishe nigunim and stories.

“My children are super excited about the 12 pesukim contest and the amazing prizes. Imagine an MP3 player for every child in addition to tickets in the raffle!” – said Mrs. Baila Baumgarten, shlucha to Buenos Aires, Argentina. “I’ve been spending extra time learning the material with them; it is very well done and so interesting!”

MyShliach, a project of Merkos Suite 302, runs an entire series of after-school activities for children of shluchim throughout the world. Many of these children do not learn in regular Lubavitch schools, and chassidishe values that most of us absorb naturally need to be emphasized and worked on. MyShliach provides these core chassidishe principles.

Rabbi Mendy Kotlarsky, director of Merkos Suite 302, explains, “There are thousands of yaldei hashluchim around the world. On the one hand they’re filled with the fire of being the Rebbe’s shluchim, but being the only Lubavitcher in school can be tough, both emotionally and intellectually. These programs provide the perfect energy and background needed to empower yaldei hashluchim in everything they do.”

The contest had tracks in English, Hebrew, and Spanish. Nearly 500 children took part in the contest, from locales as diverse as North America, Israel, the CIS, Europe, Thailand, China, Australia, and South America.

Mrs. Sara Bluming, shlucha to Potomac, MD, related, “Recently I overheard my 8 year old talking with my 5 year old. The eight year old says, ‘The Torah belongs to the baby from the second she was born. If you don’t teach her Torah it’s like stealing!’ It was so cute. Thank you for doing this!”