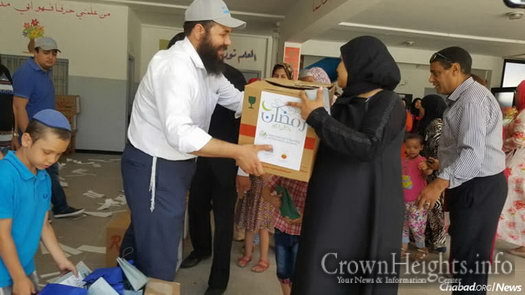 Rabbi Levi Banon of Jeunesse Chabad Morocco, center, led a group of volunteers to some of the poorest areas in the cities of Kenitra, Rabat and Sale to distribute the food.

In what sounds like a page ripped out of novel, several dozen Muslim activists, a group of Jewish teens and a rabbi joined forces on Sunday in a number of Moroccan cities to supply 1,500 underprivileged Muslim families with food staples for the daily meal that marks the end of each daily fast during Ramadan.

The food packages were a three-way partnership organized by the International Fellowship of Christians and Jews, founded and directed by Rabbi Yechiel Eckstein; Chabad-Lubavitch of Morocco; and the Mimouna Association, an organization of Moroccan Muslim students who work to preserve and promote the unique heritage of Morocco’s ancient Jewish community.

“We are privileged to help support Moroccans in need celebrate the holy month of Ramadan,” said Eckstein. “This inspiring joint initiative serves as a shining model of bridge building between Christians, Jews and Muslims, and shows that the world’s faith communities can unite around shared values to make a difference for good.”

Rabbi Levi Banon of Jeunesse Chabad Morocco led a group of teens from the local Chabad and volunteers from Mimouna to the poorest areas in the cities of Kenitra, Rabat and Sale to distribute the food.

“This is a beautiful display of how people from different faiths can get together to do something positive,” said Laziza Dalil, a member of Mimouna. “We are now two weeks into Ramadan, and some of these families may not have the most basic supplies with which to break the fast.”

Each box contains dates, tea, lentils, chickpeas and other food staples with which Muslims traditionally break their Ramadan fasts each evening.

This year’s distribution follows the successful pilot program last year, in which 250 packages were delivered. According to Dalil, some of the recipients were taken aback to discover that the gift was brought to them by people outside of the Muslim faith, but “they really did not care. They were touched by the human gesture of caring, and the fact that people thought about them and their families.”

“It was such a wonderful gesture that really brought out the best in people,” noted Banon. “It is touching to see that charity that has been done in other parts of the world though the IFCJ is now being felt in the Muslim world, especially beginning in Morocco, a country of tolerance and peace.”