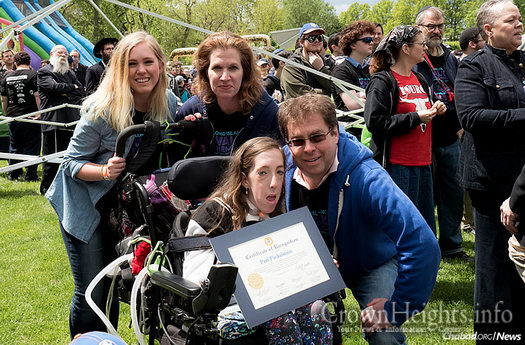 Like most 16-year-old girls, Peri Finkelstein enjoys baking, fashion and shopping, spending time with friends and laughing over humorous stories. But not giggling. Definitely not giggling; rather, “it’s a no-holds-barred, knee-slapping kind of laugh,” according to her mother.

But unlike most 16-year-old girls, Finkelstein was born with a neuromuscular disorder called Nemaline myopthy (or Nemaline rod myopathy). She has been on a ventilator since she was 2; has had eight spinal surgeries and more than 20 other surgeries; and is confined to a wheelchair.

Finkelstein, however, is not one to let such details get in her way.

On May 15, she received the 2016 Ambassador Award at the Long Island “Walk 4 Friendship” as part of the Chabad-run Friendship Circle in West Hempstead, N.Y., in honor of her participation in the 2016 Miami Marathon back in January. Though doctors did not expect that she would ever be able to walk in her lifetime, Finkelstein managed more than 1,400 steps to cross the finish line at the marathon in order to raise money for Chai Lifeline, a Jewish organization that provides support to children who are ill.

“I honestly feel so inspired to be a part of such a wonderful organization,” she says. “I did not just receive this award; all the kids who are involved in [Friendship Circle] did. I feel like I owe these organizations my life because of what they did for my family and me ever since I was a little girl. This is why I raise money for them every year. We are ‘Team Peri,’ and we are just getting started.”

Finkelstein plans to return to Miami next January to raise even more money by walking an entire mile. This is the eighth year that Finkelstein’s team has participated, raising some $120,000 throughout the years involved.

“I hope that my friends who are able-bodied will take this situation in their own hands, and create something of their own and be a role model for others to follow as well,” she says.

At age 7, Finkelstein became involved with Friendship Circle, an organization that brings together teenage volunteers and children with special needs for hours of fun and friendship. These shared experiences empower the children, while enriching the lives of everyone involved.

“What I enjoy most are the bonds that you make with one another. Not only do the volunteers take time to be with you, but they also treat you just like an ordinary person,” explains Finkelstein.

“It’s not what you see on the outside, but what you see on the inside,” she continues. “I believe that people with disabilities should have no special treatment in the way they appear. This is why I love my Friendship Circle girls—because they truly understand the real person I am, and not the person that I seem to be.”

“Friendship Circle has been a big part of Peri’s life,” says Lori Finkelstein. “She has made so many friends that she wouldn’t have had the opportunity to meet otherwise. And the relationships are beneficial both ways because Peri’s friends learn a lot from her. It also puts things in perspective for us—seeing that others may have even bigger problems than you—and we must make sure to put our best foot forward every day.”

The Finkelsteins were one of the first families to participate in the Long Island Friendship Circle when it was established in 2004. Peri Finkelstein says that during visits, the girls just “hang out and talk like normal teenage girls.” She loves that the volunteers are her age because it makes it much easier for them to connect with one another.

“There is no difference between me and them except for the fact that I am disabled. That does not define who I am as a person though,” she clarifies. “I still have the mind of a teenager. Not only do we talk and hang out, but we have snacks and sometimes play some games, too. But most of the time, we just talk our brains out.”

For Rabbi Yossi Lieberman, who runs Chabad of West Hempstead and Friendship Circle with his wife, Chaya Rochel, Finkelstein’s involvement has enhanced the organization in their community.

“Peri has accomplished tremendous things, and our volunteers receive tremendous inspiration from her,” attests Lieberman. “Peri’s strength and enthusiasm, despite her challenges, inspire us all.”

Those around her—including an older sister, Katy, and an older brother, Joel, who are both in their 20s—describe her as a very positive, compassionate, happy person.

Gives Back When She Can

Finkelstein has certainly made it her priority to greet each day with joy and productivity. As a tenth-grader at the Henry Viscardi School in Albertson, N.Y., she was just admitted to the National Honor Society and has been studying diligently for three New York Regents Exams at the conclusion of the school year. Her favorite subjects are math, social studies and science.

Though she may be hospitalized for weeks at a time (and despite the fact that she has missed more than 500 days of school since kindergarten), Finkelstein refuses to let challenges stand in her way. Quite the contrary, she makes a point to use them as a springboard to move forward.

For Finkelstein, being able to give back to the organizations that have helped her is most meaningful. In preparation for the marathon each year, she volunteers to stuff envelopes with solicitation letters, and reach out to people through social media and email. And every year, she donates toys to the Child Life Center at Winthrop University Hospital as a way to thank them for what they’ve done for her.

The teenager aspires to attend college and graduate school, majoring in law with a minor in education, physiology, hospital administration or business.

Says Finkelstein: “My body may not cooperate, but my mind does, so I better use it.”