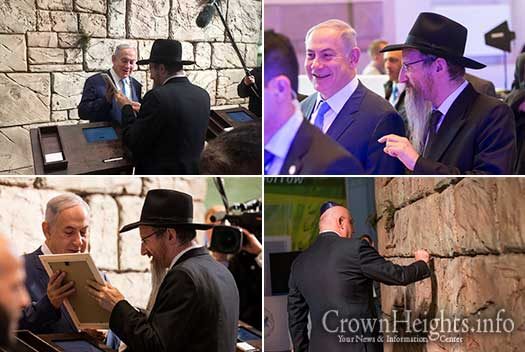 Prime Minister Benjamin Netanyahu, who came to Russia to meet with Russian President Vladimir Putin, sent a virtual prayer note through the “Western Wall” display shown at the new educational exhibition in front of the Kremlin in central Moscow. Highlight of the visit: an exciting surprise presented to Netanyahu by the Chief Rabbi of Russia, Rabbi Berel Lazar, in cooperation with the Kfar Chabad weekly magazine * details inside.

Prime Minister Benjamin Netanyahu, who came to Russia to meet with Russian President Vladimir Putin, sent a virtual prayer note through the “Western Wall” display shown at the new educational exhibition, which he inaugurated, in front of the Kremlin in central Moscow.

At the entrance to the exhibition set up by the Israeli Embassy in Russia, marking 25 years since the renewal of relations between Israel and Russia, stands a model of the “Western Wall” which was set up by the Federation of Jewish Communities of Russia. The notes with prayer requests are sent to Jerusalem where a representative of the Jewish community will pray at the only remaining wall of our Holy Temple on behalf of the sender from Moscow.

Prime Minister Netanyahu thanked the initiator of the “Western Wall” exhibit in Russia, Chief Rabbi, Berl Lazar, for the important project and said “thank you for the warm welcome, we definitely feel at home. Israel’s doors are open to Russia and Russia’s doors are open to Israel”. Netanyahu added “we are marking 25 years to the renewal of relations between us, and they are not limited to culture and technology alone. In addition, there is a human bridge of over one million Russian speakers who have become our flesh and blood, but are also ambassadors of goodwill, Israeli citizens who are immigrants from the Former Soviet Union”.

Netanyahu’s visit to the “Western Wall” exhibit was covered extensively by the media personnel who were there.

At the climax of the visit, the Prime Minister received a touching surprise: a letter that the Lubavicher Rebbe wrote to him on Rosh Chodesh Sivan, exactly 28 year ago. In the letter, the Rebbe addresses Netanyahu as “one who has done much for the needs of the public, especially in defense of the land of Israel’s affairs”.

The special letter, which is from the archives of Rabbi Dr. Nissim Mindel and given to the Kfar Chabad Magazine by Rabbi Sholom Ber Schapiro was presented to Rabbi Lazar, ahead of publication in the upcoming issue. The editor, Rabbi Menachem Cohen, devoted his weekly column to the story of the letter and the response of the Prime Minister.

Presented below is an excerpt from the column that will be published in full in this weeks edition of the the Kfar Chabad magazine:

“It’s precious to me, it’s dear to me” Netanyahu responded in amazement while holding on to the letter as soon as Rabbi Lazar finished reading it. “The things that the Rebbe wrote to me, the Rebbe’s blessings, are very important to me. Especially now, before my meeting with President Putin”, he added. His wife, who asked for some explanation about the letter’s context, received a detailed account, with the Prime Minister listening closely to every word.

It was difficult for Netanyahu to part with the letter and he held it in his hands for a long time, even while the exhibition tour continued as planned. At one point he was seen putting on his reading glasses and reading the letter again, poring over every word. The Prime Minister’s assistants did not really appreciate this unexpected surprise, especially when he could be seen walking around the exhibition with the framed letter in his hand, as dozens of photographers documented his every move.

Upon request to take the letter from his hands, Netanyahu responded “bring it to Israel, I want this to be in my office”.