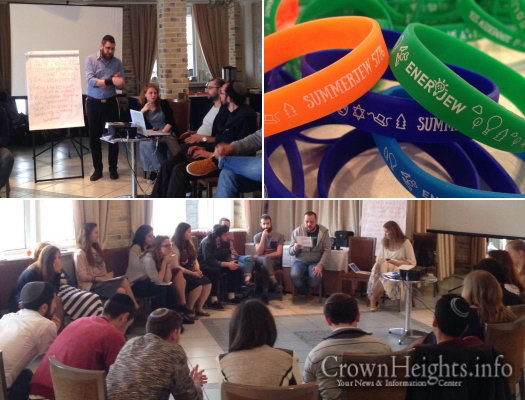 A unique EnerJew seminar focused on planning activities and special programs during the summer in the Federation of Jewish Communities’ (FJC) network of summer camps across the former Soviet Union (FSU), took place in a Moscow suburb last week. 30 EnerJew activists from 15 FSU cities came together to create a pilot project -” SummerJew” that would integrate the youth movement in sleep-away and day summer camps.

The activists, who are the aspiring future leaders of their clubs and communities, will become counsellors in the camps, implementing a wide range of events and activities and gaining valuable experience in working with Jewish children and teenagers. Professional mentors and EnerJew’s ‘Young Rabbis’ led the planning seminar, which resembled a “marathon” in its intensity.

“For a long time the staff for FJC’s Gan Israel summer camps would come to the FSU from other countries, as there were little qualified resources locally,” said Eliezer Lesovoy, EnerJew’s educational director. “This has been gradually changing, and this year – thanks to the initiative – we will see many more camps staffed by local young people, who are active and enthusiastic about what they do, and that is very inspiring,” he said.

More than 20 camps across the former Soviet Union will be participating in the SummerJew project and will be staffed with EnerJew activists.

Ever since 1991, thousands of children in the FSU between ages of 5 to 15 attended FJC’s camp network every summer. This year FJC’s Gan Israel summer camp network will celebrate its 25th anniversary.