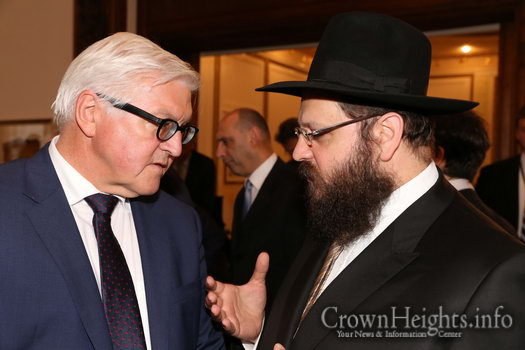 German Foreign Minister, Dr. Frank Walter Steinmeier has met let night (Tuesday) with Rabbi Yehuda Teichtal, Rabbi of the Jewish community in Berlin and the Shliach to the city. The meeting took place on the margins of an event to mark the 50th anniversary of the establishment of relations between the state of Israel and Germany.

The two, who have been friends for years, discussed the state of the Jewish community in berlin, in light of the recent developments in Germany. During the meeting, Rabbi Teichtal updated Foreign Minister Steinmeier about the Jewish activity in the city and about the community’s development plans. At the end of the meeting the two concluded that they will keep working together for the community and to promote the relations between the German government and the Jewish community.

The German Foreign minister was amongst the people awarded by the Israeli ambassador, Yaakov Hadas-Handelsman.

During the ceremony, Foreign Minister Steinmeier addressed the crowd saying that “The Germans and Israelis have been on a long road together, from the darkness of the trenches of the past towards peace and reconciliation and I’m hopeful that this road will lead us to friendship.”

Rabbi Teichtal attended the ceremony as the official representative of the Jewish community in Berlin.