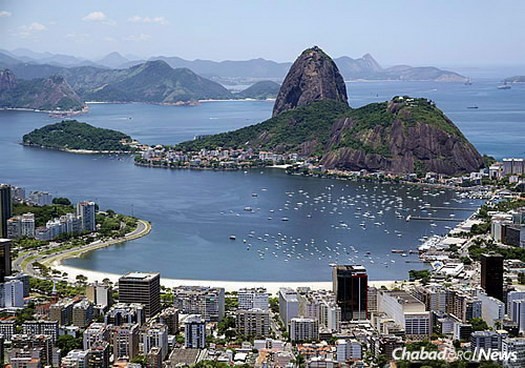 Rio de Janeiro—the site of the 2016 Summer Olympics—has long been one of the most visited places in South America, known for its crescent-shaped beaches and dramatic Sugarloaf Mountain.

In the six years since Rio de Janeiro was chosen to host the 2016 Summer Olympics, billions of dollars have been poured into the renovation and construction of the city’s transportation system, sporting venues, hotels and urban infrastructure. With the Olympics just months away—the games take place from Aug. 5 to Aug. 21, followed by the Paralympics—Rio is frantically getting itself ready to welcome 10,500 athletes from around the world, as well as the 1.3 million tourists the sporting event is anticipated to draw.

For months, Chabad-Lubavitch of Rio de Janeiro has also been preparing for the influx of Jewish visitors. At least 250 athletes are Jewish, and some 40,000 members of the tribe are expected to descend on the beachside city over the three weeks the games will be played, one-quarter of them Israeli.

“We’ve been working overtime to make sure that every Jew who comes here will have their religious needs fulfilled,” says Rabbi Yehoshua Binyamin Goldman, regional director of Chabad of Rio de Janeiro. “I’ve been in close contact with my colleagues in Sochi, Russia [host of the 2014 Winter Olympics] and London [2012 Summer Olympics], who did a great job catering to Jewish guests in previous years. They have been very helpful to us in planning our activities.”

Chabad’s plans include four kosherconcession stands, a temporary synagogue and a Jewish community center near the Olympic village, where Jewish athletes, journalists and tourists can stop in to eat, pray and relax.

“In anticipation of the increased need, we will be dispatching rabbinical students, fluent in multiple languages, to assist the local shluchim and community,” says RabbiMoshe Kotlarsky, vice chairman of Merkos L’Inyonei Chinuch, the educational arm of the Chabad-Lubavitch movement. “This is the mission the Rebbe[Rabbi Menachem M. Schneerson, of righteous memory] charged us with—to care for every Jew, wherever they may be.”

And in a ground-breaking departure from the past, for the very first time, the memorial held for the 11 Israeli athletes murdered by Palestinian terrorists at the 1972 Munich games will appear on the Olympics’ official schedule. The special event will be hosted by Rio Mayor Eduardo Paes.

“This is very important for Brazilian Jews,” says Osias Wurman, a Jewish community leader in Rio andIsrael’s honorary consul to the city. “It is the first acknowledgement. The Israeli government and the athletes’ widows have been asking for this for many years, and it never happened. Now, 44 years later, G‑d willing, we will have it in Rio.”

Rio de Janeiro has long been one of the most visited places in South America, known for its crescent-shaped beaches and dramatic Sugarloaf Mountain, coupled with samba, soccer (“football”) and an urban music scene. It’s that combination of vibrant city and stunning natural beauty that draws travelers there in droves.

Today, 13 Chabad-Lubavitch emissaries work in Rio, and under Goldman’s watch, four Chabad centers have opened across the city (four synagogue pulpits are also filled by Chabad rabbis, who run Chabad activities out of those synagogues). While primarily focused on Rio’s 30,000-strong Jewish community, Chabad has for years welcomed international Jewish tourists. The city’s iconic tourist neighborhood of Copacabana got a permanentChabad center in 2006, led by Rabbi Ilan and Deby Stiefelmann.

A few years ago, Chabad of Copacabana opened Shelanu Kosher Bistro on Barata Ribeiro Street. As the neighborhood becomes home to more new hotels being built ahead of the Olympics, the staff at Shelanu is also preparing for the Olympic crowds.

Both Rabbis Stiefelmann and Goldman are also preparing to host specialShabbat programs geared for visitors as well.

“In the Chabad synagogue, we are also preparing a big Shabbat program for the Jewish Paralympics delegation,” explains Herry Rosenberg, vice president of the Jewish Federation of Rio de Janeiro and an active member of the Chabad community in Leblon. “There is a lot of work the Rio Jewish community is doing to welcome Jews from throughout the world.”

Says Goldman: “It’s very important for us that when Jews come to Rio, they know they have a warm and vibrant Jewish place they can call home.”

Rio’s Jewish community was established for the most part in the years following World War I. Similar to the Jewish immigrant experience in other countries, many arrived penniless from Europe in search of a better future for themselves and their families. Wurman’s parents immigrated to Rio from Poland in the mid-1930s, settling in Madureira, then a poor neighborhood heavily populated by Jewish immigrants and where Wurman was born.

“My father started working with his father when he was 12 and got married at 20,” explains Wurman, also a journalist and economist. “At night, my mother and grandmother would sew belts and ties, and during the day, my father and grandfather would go door to door selling them to other poor Brazilians on credit. Jewish immigrants invented the concept credit, of paying in installments in Brazil. I was born in this poor place, but they worked very hard, and eventually, they opened a clothing store. A few decades later, they became the biggest dealers of lumber and Formica in Brazil.”

As the community grew, it established a number of large Jewish institutions, synagogues and schools. Yet by the time Rabbi Goldman and his wife,Chana, arrived in the city in 1987, there was a feeling that too many of the community’s young people were leaving the fold, uninterested in what they saw as the staid ceremonials of their parents.

“The main impact on the community has been that the Chabad emissaries go out of the synagogue to meet families, to meet schoolchildren and to meet young people,” explains Alberto Moszkowicz, a community leader who recently stepped down as president of Keren Hayesod in Rio after four years in the position. “I think that’s the key reason for Chabad’s success everywhere in Rio.”

Moszkowicz says that while many Jewish children and young adults attend Jewish schools where they can learn about and embrace their heritage, when it comes to the university level, they begin to drift away, as the Jewish surroundings they had grown up with fade into the past.

“None of our institutions were attracting these youth,” says Moszkowicz. “Then Chabad starting working on campus, doing different programs that would attract students. When young people started to attend synagogue on Shabbat, parents were shocked.”

“I would say you can split Rio’s Jewish history into two parts,” agrees Rosenberg, “before and after Chabad. If you come to our synagogue, you will see that the average age of the people there has dropped by a lot because of all of the young people.”

When they first arrived, the Goldman’s found some keystones of observant Jewish life, such as mikvah and kashrut, wanting. Hard work and determination caused that to change, and these days, there are four koshermikvahs in Rio—three of them built or drastically refurbished by Chabad.

Kosher awareness and observance in the city has also risen, from restaurants to kosher caterers and wedding halls, a direct result of Chabad’s early pioneering efforts there. The Beit Menachem School, with 150 students, operates under Chabad’s umbrella, as does a soup-kitchen program that provides hot meals for Rio’s many needy Jews. This is in addition to the many other Rio Jewish clubs, schools, synagogues and institutions that play important roles in the city’s communal life.

When Rio first placed a bid to host the Olympics, Brazil’s economy was growing, and Rio had become a boom town—one of the fastest-growing real estate markets in the Americas. Recent years saw that tide dramatically reverse, leading to rising unemployment rates, decreased wages and rapid inflation. That made some question whether the struggling city was able to put on the massive event.

Many worry that unemployment rates will jump still higher once all construction projects have been completed.

Concerns for the future are compounded by a political crisis surrounding allegations of corruption against Brazilian President Dilma Rousseff and her recent appointment of her predecessor, ex-President Luiz Inacio Lula da Silva, to a cabinet position—a move critics say is meant to protect her political ally from prosecution. Recent months have seen thousands take to the streets to protests against Rousseff, and members of Brazil’s Congress have begun inching towards impeachment proceedings against the president, causing the worst political crisis in the country since 1992.

Rosenberg says that with so much work on the Olympics already completed—and with an international focus on the event—he does not believe the political situation will have any real effect on the games.

Moszkowicz concurs, choosing to look at the situation in a happier light, believing that municipal investments in infrastructure and transportation will have a lasting impact, cutting commute times drastically and raising the quality of life for residents.

“There have been many major investments made in the city to fulfill this project, and people are very impressed,” affirms Moszkowicz. “Everything is almost ready.”

Goldman views Chabad’s work in Rio over the years in a similar vein, stressing the valuable construction of a Jewish communal infrastructure that has changed the city for the better. “I think the many Jewish tourists coming here are going to be pleasantly surprised with how Jewishly alive Rio is,” he says. “We’re looking forward to hosting them.”

Adds Wurman: “Lubavitch will have a very important part in shouldering the responsibilities of caring for Jews who come here during the Olympics, not only during the Olympics, but 24 hours a day, seven days a week, 365 days a year. This ahavat Yisrael—‘love of a fellow Jew’—this was the original DNA of the Rebbe.”