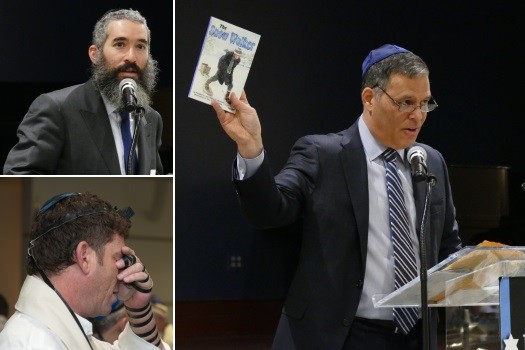 Doug Ross is the chairman of Birthright Israel’s Atlanta Regional Council and serves on the national board of the Birthright Israel Foundation, and he’s active in AIPAC because he sees the combination of the United States, Israel and the Jewish people as “the greatest force for good in the world.”

But for much of his life, Ross told an audience of Jewish men at Chabad Intown’s first Big Wrap on Wednesday morning, March 2, he has hidden his Judaism.

When he attended an Episcopal boys school in the Boston area, he kept quiet about religion unless asked, then would say his parents were Jewish but he was nothing.

When he was starting as a financial adviser in 1982 and paid a call on a potential first client, he let the native of Scotland believe that he also was Scottish.

When Pat Buchanan was running for president in 1992 and drew protests from Holocaust survivors with his opposition to further U.S. efforts to prosecute Nazi war criminals, Ross stood to the side and watched instead of joining the demonstration — only to have another observer, upon learning that Ross was Jewish, tell him, “You people make me sick, what you’re doing to the Palestinians.”

The lesson Ross has learned: “There are so many opportunities for us to hide and to not take a stand.”

Ross demonstrated some of what he has gained by embracing his Jewish identity and exploring his Jewish roots, from ancestors buried on the Mount of Olives and one who was the court physician to the Austro-Hungarian emperor to a great-grandfather who as a boy braved the record-setting blizzard of 1888 in New York to find food and medicine for his family and neighbors.

Ross also came to a realization about the oddity of having a different noun (Jew) and adjective (Jewish) for who we are, unlike every other religion. It’s as if saying we’re Jewish somehow softens the wording to help us hide.

Chabad Intown Rabbi Eliyahu Schusterman, who organized and led the Big Wrap, said earlier that the Jewish people are all brothers and sisters and thus have a responsibility to protect one another. “For most of us, our job is to help our brothers and sisters through spiritual means.”

Ross urged the others who delayed the start of their workday to attend to those spiritual means through the Big Wrap — wearing tefillin, praying, offering tzedakah, learning, eating and networking — not to take their ability to live as proud Jews for granted but instead to use that essence as the catalyst for action. He pointed to Birthright, which he said is “changing the arc of Jewish history” by bringing 500,000 of the world’s 6.5 million non-Israeli Jews to Israel.

“You all have the ability to have a magnificent effect — a huge effect — on the world, even if it’s only one person,” Ross said.

Navigating the Jewish and non-Jewish worlds can be tricky, he said, but “in your own heart, you can change the world.”