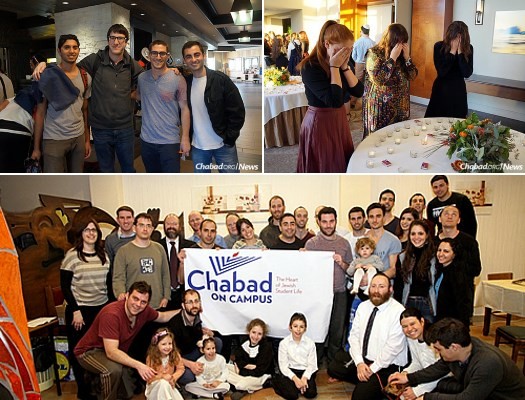 Chabad on Campus centers will host a total of seven regional Shabbatons this year throughout North America, and one in Europe, to unite students from various campuses by celebrating Shabbat together. Two of them have already taken place: one in Southern California two weeks ago and one in Philadelphia this past weekend.

These Shabbatons are taking place during the spring semester in the spirit of Hakhel-year observance—holding communal gatherings for the purpose of Jewish togetherness, pride, study and inspiration. Other regions include the New York metropolitan area, Upstate New York, the Midwest, Texas and Canada. And in central Europe, a Shabbaton in Slovakia is happening for a second year in a row.

The annual Chabad on Campus International Student Shabbaton—held in New York City in the fall and which draws more than 1,000 participants each year—has become so popular that it inspired these smaller events, which will reach some 1,200 Jewish college students.

“I just love meeting so many people who have similar backgrounds and connections,” says elementary-education senior Debbi Sacks of Drexel University in Philadelphia, who is originally from Maryland. “And because the students you meet study nearby, it’s easier to make friendships and stay in touch after the Shabbaton is over.”

Jon Shoup, also from Drexel University, has attended the international Shabbaton three times, but it is the local one where he says he has made more lasting friendships.

“I love the ‘re-meet-ability’ of everyone you meet because you’re much more likely to see them again, and you don’t have to travel far to do it,” says Shoup, who hails from the Pocono Mountains in Pennsylvania. “I like that you can see these new friends several times a year if you want to, and also the more laid-back, comfortable atmosphere to it.”

“Being a Hakhel year, it is especially gratifying to see large groups of students from various regions and backgrounds join together for an inspiring Shabbat,” says Rabbi Moshe Chaim Dubrowksi, director of programming at Chabad on Campus International. “Building on the International Shabbaton in New York City during the beginning of the academic year, the regional Shabbatons become the perfect vehicle for maintaining inspiration during the second half of the school year and bringing it home.”

A Chance to Stay Local

For Shabbaton organizers, the advantages of local programs are readily apparent. Not all students are able to travel to New York City in the fall, when course loads are just beginning or exams are taking place.

“This represents a chance to get all of the benefits of a Shabbaton, but stay local,” explains Rabbi Meir Simcha Rubashkin, director of Chabad at Oneonta-Rohr Jewish Student Center in Oneonta, N.Y., with his wife, Fraidy. They are hosting the Upstate New York Shabbaton for the first time this year.

“The Shabbaton raises a sense of Jewish awareness to help students return to their campuses re-invigorated,” says the rabbi.

Rubashkin, who served as co-chair of the International Shabbaton this year, also emphasizes the advantage of connecting students in the same geographical region, and even reuniting friends from hometowns. The Shabbatons also give students the chance to see what other local Chabads are like and to provide them with a sense of being part of the bigger COC family.

For Rabbi Shaul Wertheimer, who is organizing the second annual Shabbat in the Catskill Mountains for several New York City campuses, the smaller setting of the regional Shabbaton is what makes it most powerful. Last year, his program included 32 students from four schools, and while this year’s attendance is expected be larger, it still allows for very manageable setting, even an intimate one.

“It gives everyone the opportunity to forge more personal connections,” says Wertheimer, director of Chabad on Campus at Queens College in Kew Gardens Hills, N.Y., with his wife, Tzipah. “The international Shabbaton is incredible, but it can be too intense for some people and even a bit challenging to meet new friends because it’s so big. With this smaller Shabbaton, students have direct contact with those from other campuses.”

Raffi Cooper, a political-science major from West Hempstead, N.Y., has participated in both types of Shabbatons.

“The best part about Shabbat in the mountains is meeting kids from other schools and hearing about their different experiences. It was very special being away for such a nice Shabbat,” relates Cooper, a sophomore at Queens College. “We even got together for dinner in the city afterwards and have really kept in touch. I will definitely attend this year’s, and I hope more schools participate because it’s another opportunity to connect with new people.”

Chabad-Lubavitch emissaries say the benefits extend far beyond the programming itself.

“The Shabbaton is unifying for area students and gives them an understanding of the broader Jewish community,” explains Moussia Goldstein, who directs Chabad Serving Drexel University with her husband, Rabbi Chaim Goldstein. “It’s also important for students to know that when they graduate, Chabad is everywhere, in any community they may find themselves. They see the extent of the network—that there’s always somewhere Jewish for them to go.”

“And when they come together in such a way, from different campuses, it helps them to return to their own schools inspired to get even more involved and to help others do the same,” she continues. “What happens over the course of one weekend becomes an invaluable tool for the future of Jewish communities, arming young men and women with enhanced learning and leadership that they will bring with them, wherever they live.”

The West Coast Shabbaton, which has been running for the past 12 years, hosted 250 students from 16 schools earlier this month. Students stayed at the Carlsbad Hilton, and enjoyed prayer services, educational speakers, Israel-advocacy programs, yeshivah-style learning and entertainment.

“It’s a chance to create relationships among the different schools,” says Rabbi Dov Wagner, director of the Chabad Jewish Student Center at the University of Southern California in Los Angeles with his wife, Runya. “You can see students get inspired to greater involvement and growth in their Judaism.”

For Rabbi Yossi Lazaroff, what’s unique about the Texas Regional Shabbaton—which he is hosting and which is celebrating its eighth anniversary this year—is that it brings together students from campuses across the state, many from areas with little or no established Jewish life. Nearly 150 students come together every year for a weekend of unity, learning, interaction, and—in true Texas-style—a post-Shabbat, kosher fire-pit barbecue, declares Lazaroff, director of the Rohr Chabad Jewish Center at Texas A&M University in College Station, Texas, with his wife, Manya.

Says the rabbi: “It’s beautiful to see relationships established that they will carry with them long after the Shabbaton is over.”