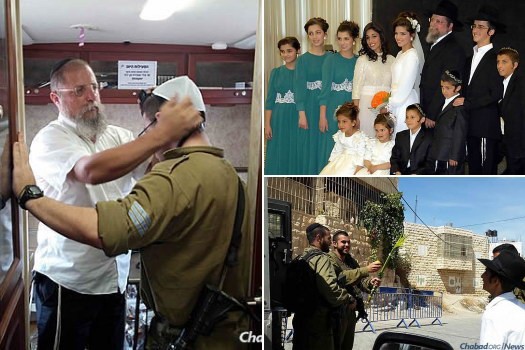 What does it take to thrive, working day in and day out in this town on the outskirts of the biblical city of Hebron, close to the Cave of the Patriarchs, amid daily and sometimes deadly terror attacks?

For Rabbi Yosef (“Yossi”) and Michal Nachshon of Chabad of Kiryat Arba, they say it’s the practical lessons they have been learning since childhood about love of Torah and the Jewish people, and the influence of the Rebbe, Rabbi Menachem. M. Schneerson, of righteous memory, on the lives of their parents.

In 1979, when the Israeli government began to permit Jews to take up residence in the area, the Rebbe sent a letter to Nachshon’s father, noted artist Rabbi Boruch Nachshon, about the most effective method of “conquering” Hebron and Kiryat Arba. In those days, there was a struggle over how to physically re-establish a Jewish community in a holy city that has had a Jewish presence for millennia—and a Chabad presence for centuries.

The Rebbe suggested to Baruch Nachshon that the way to “conquer” Hebron and Kiryat Arba was by learning and teaching Torah;nigleh (the revealed levels of the Torah—i.e., the Talmud and halachah, Jewish law); andchassidus, the innermost mystical teachings, interpretations and practice of Judaism as articulated by the Chassidic movement.

At a celebration this past summer marking Chabad of Hebron’s bar mitzvah year, Boruch Nachshon read that letter from the Rebbe, which his son and daughter-in-law said continues to inspire and strengthen the work of Chabad in Hebron and in Kiryat Arba, a town built in 1968 in the Judean Mountains.

Today, the Nachshons, along with six other emissary couples who reside in Kiryat Arba and Hebron, are living in the eye of the storm, weathering terror attacks along with every other local resident.

Nachshon’s own car was recently targeted by rock-wielding masked terrorists after he dropped his children off at their school in nearby Beitar Illit. A cinder block smashed his windshield, though he came out of it unharmed.

This was not the first time the rabbi has encountered such hazards. “All of us here—the entire community—have faced this situation on the roads on a daily basis for months now,” reports Nachshon. “It is a trying time, and keeping our eye on the target—learning Torah, performing mitzvot and helping our fellow Jews—is where we invest all of our energies because this is what will bring us through this as a stronger, more unified, G‑d-fearing and inspired community and people.”

For more than 20 years, the rabbi and his family have been living and working to spread the Torah’s teachings in the Givat Harsina neighborhood of Kiryat Arba, where they have become an integral part of the community. The 10-year-old Chabad-run synagogue there provides even more opportunity for the neighbors to meet, hold a minyan and promote Jewish involvement.

Offering Warmth to All

The Nachshons’ primary undertaking is to provide encouragement, education and an open-house environment for the thousands of Israeli Defense Forces soldiers who serve nearby. “There is a full rotation every four months, so the number of both male and female soldiers we come into contact with is enormous,” says Nachshon.

“We find these soldiers thirsty to learn about their roots, and to then take that interest from there and start incorporating it into their lives.”

Michal Nachson—whose parents, Rabbi Ovadya and Yaffa Ma’atuf are Chabad emissaries in Lod—gives classes for women in the community, and on Shabbat meals for troops able to make it over to them.

On Shabbat, it is always “open house” at the Nachshons—for military and civilian guests alike. Many soldiers stand duty on Friday nights, but that doesn’t stop them from getting permission to visit the Nachshon home for a quick Shabbat Kiddush and meal before returning to work.

The rabbi spends a significant amount of time emphasizing the mitzvah oftefillin.

Nachshon explains that he has “been teaching and helping Jewish male soldiers wrap tefillin as part of their daily routine. I also have my ‘mitzvah tank’—a huge vehicle—in which we visit the bases and conduct activities with the hope that our IDF boys will take it upon themselves to perform this important mitzvah. And the results have not only been astounding; they increase from day to day.”

Tefillin, he notes, represents a spiritual defense of Israel, encouraged by the Rebbe. Prior to the Six-Day War in June of 1967, the Rebbe launched the now-famous “Tefillin Campaign” that encourages Jewish men and boys over the age of 13 to perform the mitzvah.

Within the Israeli army, the campaign has resulted in providing thousands of soldiers with the means to don tefillin on a daily basis. Locally in and around Kiryat Arba, two yeshivah boys regularly make the rounds, helping soldiers on bases put them on. And in a program that began more than 10 years ago—in which Rabbi Nachshon partnered with Rabbi Alexander Sender Gurewitz of Lyon, France—a pair of tefillin is offered at no charge to young men who agree to use them every day.

Just last week,” says Nachshon, “we were able to give 14 young men their own pair of tefillin.”

As part of his work with soldiers, military Rabbi Eliyahu Ravoah has joined forces with Nachshon.

“We are approached by a lot by young men who come from very religious or traditional backgrounds whose tefillin somehow gets lost, but neither the young soldier nor his family has the financial means to buy new ones,” explains Ravoah. “We also have young men who never even considered tefillin as part of their lives, who today have incorporated the mitzvah into their daily lives.”

‘The Way We Can Fight Terror’

Yinon, a member of an elite naval commando unit (who cannot be identified because of his military position), was a boy who had grown up with tefillin and a solid religious education, but moved away from Jewish tradition as he got older, according to his father.

“About six months ago, Yinon told me he had been laying tefillin for months,” recounts his father. “He had lost the ones he received at his bar mitzvah and knew that buying a new pair was beyond our means right now. He learned that Rabbi Nachshon helps obtain tefillin for men who take it upon themselves to do this mitzvah every day.”

Yinon’s father contacted Nachshon; shortly afterwards, the young soldier received his own pair of tefillin. “Through this, I can see him returning to Torah observance in many more ways,” says his father. “And he recognizes that this comes from within him, thank G‑d.”

Eliran Fadida, a 20-year-old resident of Kiryat Ata, started to put on tefillinabout eight months ago after not observing the mitzvah for a number of years. He received a new pair last week from Nachshon. “You can be sure that I will cherish these in a way I didn’t understand the first time around,” he says.

“Every day,” affirms Nachshon, “there are more young men who add themselves to the thousands who have already taken it upon themselves to fulfill this mitzvah.”

“This is the way we can fight terror,” stresses the rabbi, “as well as reconnect ourselves to the Creator by doing the mitzvot He has commanded us to do. And this is what will snatch victory from the jaws of the enemy and deliver it into hands of His children: Torah, mitzvot and love of a fellow Jew.”