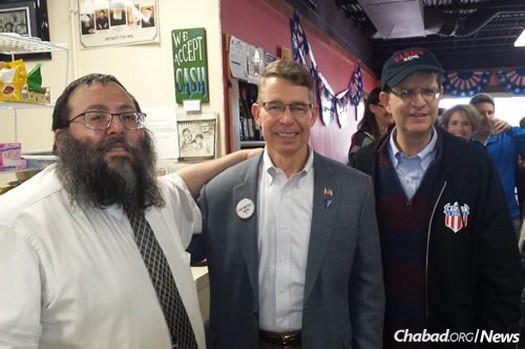 In Iowa, Rabbi Serves Up Great Food and Greater Wisdom

Rabbi Yossi Jacobson will join his neighbors throughout Iowa and head out for caucus night tonight, when as every four years they will be the first in the nation to vote in the always-contentious presidential primaries.

But before that, the rabbi is keeping busy – very busy – serving up kosherfood with a side of Torah and Chassidic wisdom at Maccabee’s Kosher Deli, a project of Chabad-Lubavitch of Iowa, to the many visitors from around the nation and the world who have been in town this political season.

“We’ve met a lot of the Jewish students from all over America who are here running around pushing their candidates,” says Jacobson, director of Chabad-Lubavitch of Iowa. “Our kosher deli fulfills an important need for Jewish volunteers and staff. Plus for them and for everyone who visits it’s an hour break away from the campaign when they can enjoy a pastrami or corned beef sandwich, and get a d’var Torah (Torah lesson) as well.”

The restaurant is a welcome stop where Des Moines Register food critic Karla Walsh recently raved about the “super-crunchy and tangy homemade pickles” and gave thumbs up to the pastrami and corned beef on rye sandwiches that “were freshly sliced and trumped supermarket meat counter varieties,” noting that “the beautiful full-wall mural of a bustling Middle Eastern marketplace, painted gratis by local artist James Navarro, will have you hankering for more.”

A Deli That Also Nourishes the Soul

But this is one deli where the food is secondary. Noting that his “office” is a table inside the deli, the rabbi says, “When people come in we start talking. Today, everything has to happen quickly. It’s an instant world, and sometimes you have to deliver the kedushah, the holiness, in an informal, instant way and that’s what they have here.”

It’s also provides a safe space and a welcome break, the rabbi notes; where people from across the political spectrum engaging in daily political combat can occasionally sit across a table, hear a few words of Torah teachings, and focus on what brings them together, not what sets them apart.

“You have people from really across the board who come in to the deli for different reasons. There’s one thing everyone wants and needs and that’s a good meal, and that’s the beauty of being the face of the community. This is the way the message of the Rebbe [Rabbi Menachem M. Schneerson, of righteous memory] is reaching hundreds of people each week who don’t necessarily come because it’s kosher, but because it’s a five-star deli.”

He also keeps a pair of tefillin at the deli for Jewish men who want to take part in the mitzvah.

Jacobson makes clear it isn’t just in the restaurant where he and his family interact with the campaign volunteers and staff.

A group of college students who are stumping for Democrat Hillary Clinton, have been in town for a few weeks and have been coming toShabbat meals at the Jacobson’s home. The group of 8 to 10 students even helped make a minyan recently to ensure that a Des Moines resident who needed to say Kaddish, the memorial prayer for a loved one, got to do so.

From the Republican side, BenCarson’s campaign held a rally atMaccabees deli on Sunday, the day before the caucuses. According to Dr. Mark Young of Maryland, who coordinated the event, the deli was the perfect setting.

“As an observant Jew, the task of visiting many different cities and small towns across the country and finding fresh kosher food in a nice milieu is always a daunting challenge,” said Young.

Compounding the issue is identifying an eatery suitable for holding an event and meeting with friends, family and business associates. “While there were only a few of us who eat kosher regularly at the party, the food was enjoyed by Jew and non-Jew alike! A real Kiddush Hashem! One person at the party even had a chance to lay tefillin.”

Earlier in the campaign, staffers from Bernie Sanders’ campaign, meanwhile, got to enjoy a little taste of Chanukah when the candidate arranged for a delivery of potato pancakes from the deli during the festival of lights.

Then there was the doctor from New Jersey who is in town to help his candidate, Gov. Chris Christie, a Republican. The doctor, who keeps kosher, ordered meals not just for himself, but for some 20 staffers that Jacobson’s son, Laibel, delivered to a local hotel.

“I went and dropped off the food for him, and then he put on tefillin,” recounts the younger Jacobson, adding that they also spent time a few minutes talking about the doctor’s home state as Jacobson attended rabbinic school there a few years ago.

“It’s interesting to see how many people fly in from across the country,” says Laibel Jacobson. “We get to meet all these people who come to Des Moines and are looking for kosher and they find a kosher establishment here where they can get food and they meet people with whom they can stay for Shabbat.”

As for Monday night, the rabbi is looking forward to going out and doing his civic duty. “People expect me to go, it’s a responsibility,” he says, adding, “if you participate it shows you care. Every vote counts and we are in a critical period.”

“This is a very serious election,” concludes Jacobson. “In all my years here, I’ve never seen the thrill and the anticipation of the youth as I am experiencing this time.”