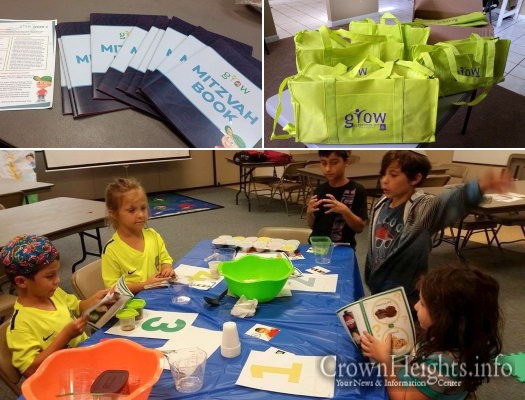 Children naturally want to learn and grow, and CKids’ new GROW enrichment programs are designed to inspire kids to become the best people they can be. The first course, a curriculum about the mitzvah of hachnossas orchim, recently launched in over forty locations worldwide and was a resounding success.

Through exciting and challenging activities encouraging creativity and teamwork, kids learned how to be good hosts, how to respect differing viewpoints, and how to resolve differences peacefully.

Shluchim who ran the program were impressed with the program’s emphasis on experiential learning. “It was very hands-on,” observed Mrs. Rochel Eliefja of West Bloomfield, Michigan. “Kids made their own discoveries and really lived what they learned.”

Children who attended the first Grow course were enthusiastic and engaged in this new approach to Jewish learning, making the program a hit with their parents, as well. A parent from Chabad at Hartford (Conn.) said, “My child is actually more excited about Grow than camp.”

Michael Ben-Avie, a researcher at the Yale Child Study Center, conducted a follow-up study and found that participating in the Grow course had a positive impact on kids’ attitudes and behavior. Students showed an improved ability to solve problems and think reflectively. Even more notably, they showed increased empathy—behaving with more ahavas Yisroel after completing the course than they had before.

CKids’ Grow is a project of Merkos 302 and promotes children’s self-growth through Torah. For more information about Grow, visit www.ckidsgrow.org.