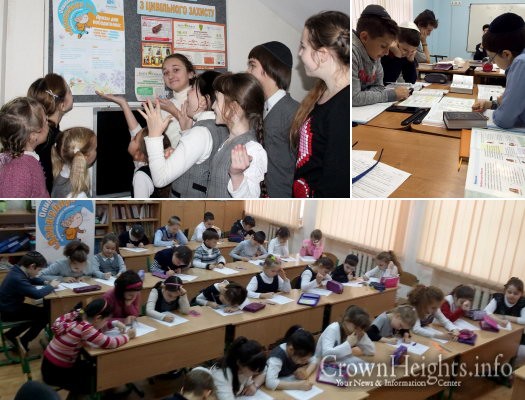 Thousands of Jewish pupils across the former Soviet Union, students at the Federation of Jewish Communities’ (FJC) ‘Or Avner’ network of Jewish schools, participated last week in the first stage of the 3rd annual  ‘Darkeinu’ Olympic Jewish heritage quiz for 2015.

Jewish ethics, festivals and traditions, the uniqueness of the Shabbat and our nation’s heroes from the Tanach are the chosen topics for this year’s contest that is participated by pupils from 40 different schools in Ukraine, Russia, Kazakhstan, Azerbaijan, Belarus and Latvia.

The second stage, scheduled for the end of February 2016, will consist of a written test and will only be open to the pupils who have attained the highest results in the first round.  The final round and public quiz is planned take place during May 2016, and will be attended by FSU’s most talented pupils and their families.

The study materials for the quiz are based on the FJC’s revolutionary Jewish heritage learning program ‘Darkeinu’ that has been specially developed to fit the language and mentality of today’s Jewish children in the Former Soviet Union.

“This program was tremendously successful in previous years,” explains Mrs. Ira Dashevsky the program director, “in bringing the Jewish heritage topics to the front line of the children’s interests, and simultaneously to their entire families. The quiz motivates the pupils to gain additional knowledge and connect emotionally to the study topics.”