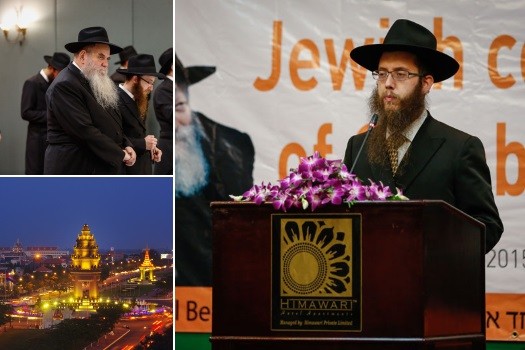 More than 100 members of Cambodia’s Jewish community and visitors from around the world gathered in Phnom Penh on Tuesday to inaugurate the city’s new Chabad Jewish Center in a ceremony that culminated with the placing of the Mezuzah in the doorways of the building.

From The Cambodia Daily:

“What makes Chabad so unique is you find it in places where you wouldn’t think a Jewish center would exist,” said Rabbi Shlomi Tabib, the director of the Chabad house in Taipei, who traveled to Cambodia for the first time on Tuesday to take part in the celebration.

Phnom Penh’s current Chabad Center was opened by Rabbi Bentzion Butman and his wife Mashie in 2009, and has since served as a gathering place for Cambodia’s small expatriate Jewish community and the large numbers of Israeli backpackers making their way through Southeast Asia.

“Obviously, there is not a strong Jewish presence here, but nevertheless, Rabbi Butman and his family decided to move here and serve as a powerhouse to all the Jewish travelers and residents—you name it, they have it,” Rabbi Tabib said.

David Benaim, a business consultant from Gibraltar who lives in Phnom Penh, put Phnom Penh’s Jewish population at around 200 but said that Israeli travelers bolstered the numbers coming through the Chabad center’s doors.

“Travelers make up a fairly big number,” Mr. Benaim said. “On a Friday night, for example, in high tourist season, there’s a lot of Israeli backpackers passing through and they come to the events.”

“[The Butmans] do a lot of services. They do Friday night dinners every week and Saturday morning brunches as well and [hold] religious services and social gatherings,” he said. “They also support Jewish capacities…like there is a cemetery, for example.”

Click here to continue reading at The Cambodia Daily.