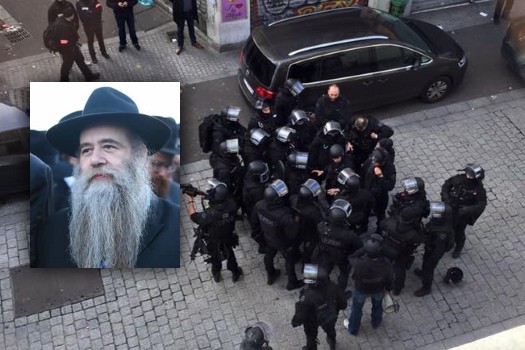 After a raid in the poor and heavily-Muslim Paris suburb in which two suspected terrorists died and seven were arrested, Rabbi Mendel Belinow says “our public Menorah will shine even brighter this year.”

The presence of terrorists in the Paris suburb of Saint-Denis will not affect the daily life of the Jewish community there, the head of the local Chabad center said Wednesday.

Rabbi Mendel Belinow said the community will only “increase the volume of its activities” following a raid Wednesday that ended with the death of two suspected terrorists and a police dog in the poor and heavily-Muslim suburb north of the capital. Police stormed a building in Saint-Denis believing it was the hiding place of people responsible for the attacks that killed at least 129 people on Friday.

“We are not suspending our activities, and are preparing to celebrate Hanukkah as usual,” Belinow said, adding he was “not surprised at all” by news that terrorists chose to hide in the municipality. “It’s a difficult neighborhood, that is no stranger to extremism,” he said.

When Chanukah begins at sundown on Sunday, Dec. 6, residents of the Saint-Denis neighborhood of Paris will be able to count on an uplifting tradition this year despite major terror attacks that have rocked and unnerved the city this year: the outdoor menorah-lighting that has been a neighborhood celebration in Saint-Denis for decades.

“We’ve been doing it for 24 years … we should stop now? No, we’re going to make it even better than in other years,” affirmed Rabbi Mendel Belinow, director of Beth Chabad S.-Denis & La Plaine. The menorah is but one of hundreds of outdoor menorahs that will be on display throughout Paris again this year.

The rabbi made his remarks from his home in the Saint-Denis neighborhood just hours after police raided a nearby building where suspected armed terrorists were hiding. Two people, including a female suicide bomber who triggered an explosive, were killed and seven other alleged terrorists were arrested, according to reports.

The incident came just days after 129 people were killed on Nov. 13 in multiple terror attacks that targeted recreational areas and restaurants.

Then, on Wednesday evening, Rabbi Tsion Saadon, a Chabad-Lubavitch school teacher in Marseille, was stabbed by three assailants. Reports indicate the attackers uttered anti-Semitic phrases and declared themselves ISIS supporters while knifing the teacher, whose injuries are reported as non-life-threatening. The attack follows on the heels of an Oct. 24 incident, also in Marseille, in which three Jewish residents were stabbed outside a synagogue.

Discussing the police action in Saint-Denis earlier in the day, Rabbi Belinow said that the authorities approached the area around 4 a.m. Hearing the commotion, he stepped outside to see what was happening. He was quickly ordered back inside, where he remained for most of the day. The Chabad House and community center, which includes a shul, a mikvah, the Ohr Menachem day school, a catering hall and a pizza shop, are just a few meters away from the police activity.

The building, like most everything in the Saint-Denis area, was closed for the day.

Saint-Denis is home to some 15,000 Jews and a very large Muslim population.

Recounting the events of this morning, Belinow said: “It was like a war. I never, never saw such a thing. Thank G‑d, there were no injuries to people in our community and we’re also relieved that there was no damage to the Chabad House.”

He has been fielding phone calls all day from concerned Jewish community members, in addition to local residents offering their support.

The rabbi emphasized that it is important for people to keep going and to be strong. He says he personally takes strength in knowing that he is a shaliach—an emissary of the Lubavitcher Rebbe, Rabbi Menachem M. Schneerson, of righteous memory—fulfilling his mission.

In response what seems to be a spate of terror attacks in the world Belinow responded the way any Chabad rabbi would, saying “we have to do more, give more.”