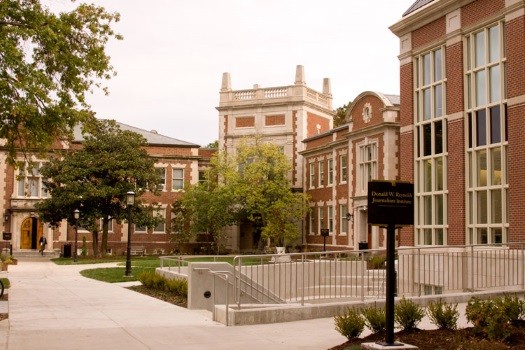 The University of Missouri.

Students members of Chabad at the University of Missouri campus launched an initiative this week to rein in tensions at the campus, after a series of racially charged incidents led to a student backlash and the resignation of the school’s chancellor and president, The Algemeiner has learned.

Chabad announced in a press release on Friday that the students would set up a table on campus asking passersby to write down a random good deed they will do for another student on campus.

Kelton Tabor, a Missouri U sophomore from San Diego and Chabad’s social action chair, said the tense atmosphere on campus was clearly palpable.

“With this event, we’re hoping to defuse some of it and to encourage students to find a peaceful way of ending the racism and hate that’s been occurring recently,” he said. “It is up to the students to set an example for their peers and to oppose this violence peacefully.”

MU Chabad co-director Rabbi Avromi Lapine said there had been several antisemitic and racist acts on campus over the last several weeks, leaving students on edge.

“The Jewish response to darkness has always been to increase light,” he said. “By doing additional mitzvot – acts of kindness – we have the ability to make this a more loving and respectful place, both locally and globally.”

Chabad’s program came after MU’s chancellor and president stepped down in the wake of intense student protests, a hunger strike and the threat of boycott from the school’s football team, following a series of racist incidents, like the smearing of a swastika in feces on a new college dormitory’s white wall.