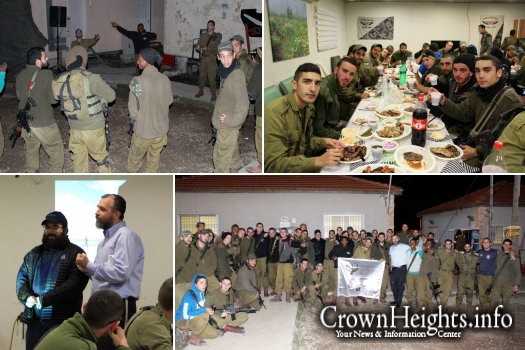 Recently, as they exited their vehicle to engage the Palestinian rock throwers attacking them, a group of Israeli Defense Forces soldiers were run over by a Palestinian car that came out of the darkness headed straight toward them at a high rate of speed.

Five were wounded in this vehicular terror attack and were rushed by Magen David Adom paramedics to the nearest hospital.  A sixth soldier managed to open fire on the terrorists.

Among the five soldiers wounded by the car that night was the company commander named Ron. Rabbi Itzik Neimark of Chabad of Chevronknows Ron from his service in Chevron some time before.

Rabbi Neimark’s first call was to Chabad’s Terror Victims Project (CTVP). They immediately sent a large team to the hospital to visit and assist the soldiers and their families. Ron, the commander, told CTVP that his company’s spirits were very low, and asked if there was anything they could do to help lift their spirits?

Relates Rabbi Yossi Swerdlow of CTVP: “We immediately sprang into action and, coordinating with Rabbi Neimark, arranged a spectacular barbecue, with all the trimmings, for 140 soldiers at their base.

“Together we sang and danced and ate delicious food. The soldiers heard moving words of inspiration and encouragement from their commander Ron. Though still wounded, he came to the barbeque on crutches to be with his men. There was also a video hookup for those still in the hospital.

“Before we went to the barbeque, we went to the hospital to visit Gal, one of the soldiers wounded in the attack. It was his birthday that day and we brought balloons and gifts to cheer him up. We told him we were on our way to be with the rest of his company to celebrate the miracle of their having survived the attack.”

Joining CTVP at this celebration of life with the soldiers was Rabbi Mayshe Schwartz, Chabad Shaliach of Brookline, Massachusetts, and his friend Dr. David Katzin from Los Angeles.

Both also shared words of encouragement and gratitude during the barbecue. They told the soldiers how deeply grateful the Jewish people around the world are for their courage and for their protection of Israel and all Jews everywhere.

It was a very moving evening, one that allowed the soldiers to have a brief respite from the tension and vigilance they are constantly under because of the random and vicious nature of the horrific terror attacks that have been perpetrated against Israel and her people in recent weeks.

You too can help the soldiers of the Israel Defense Forces and the people of Israel during this dangerous time by clicking here to make the largest emergency donation to Chabad’s Terror Victims Project you can. You will be directly aiding and supporting the soldiers and people of Israel when you do: http://www.ctvp.org/templates/articlecco_cdo/aid/1126571/jewish/Donate.htm.