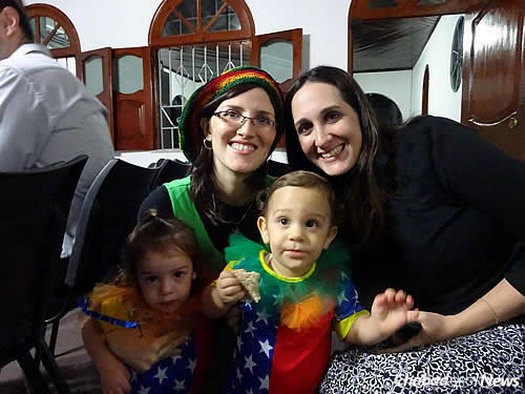 Dvorah Lea Raichman, left, with Tatiana Azulay, whose husband practices medicine in Manaus. Azulay thinks more women would go to the mikvah if one was constructed there.

New in the Midst of the Amazon Rainforest: A Kosher Mikvah

“There’s no kosher grocery, no Jewish day school and not too many Jewish toddlers for my almost 2-year-old to socialize with,” says the São Paolo native, who followed her Manaus-born husband to his hometown around two years ago. “But the Raichmans do an amazing job at making Judaism easier, meaningful and exciting for our small community,” she says, referring to Rabbi Arieh and Dvorah Lea Raichman, co-directors of Chabad-Lubavitch of Manaus since 2009.

Yet one area of Jewish life that has remained challenging is mikvah, the married woman’s monthly immersion in a pool of naturally collected water that is the bedrock of Jewish family life.

For much of the community’s history—stretching back to the late 19th-century rubber boom—they functioned without a specially constructed mikvah.

“We were told that people used the Amazon River,” says Dvorah Lea Raichman, “but that’s not practical for a number of reasons. First of all, the only time to get any privacy is at night, and some stretches of the river are shared with black caimans, snakes, piranhas and other unfriendly surprises.”

There are also halachic difficulties since rainwater is only valid for a mikvah if the water is contained, unlike the mighty, gushing Amazon. Thus, a prospective mikvah-goer would need to boat out to the middle of the wide river in order to immerse in what is assumed to be spring water, kosher even while moving.

Azulay says the rabbi periodically takes a boat out to the river to immerse new food vessels, as mandated by halachah, Jewish law. While she appreciates his efforts, she feels that the community would benefit from a proper mikvah, which would free them from troubling him every time they purchase a new pot.

‘The Beauty of Observance’

In recent years, Raichman says that a small nucleus of observant couples have coalesced around the Chabad center, making the need for the mikvah more acute. “Right now, some women fly to São Paulo, which takes four hours, or Belem, which is a two-hour flight—or five-day boat ride—each way,” she reports. “But the time has come for us to have a halachically acceptable, palatable option right here in Manaus.”

Azulay says the trips to São Paulo are a welcome opportunity for her to visit family and friends, and stock up on kosher supplies. Still, “it’s very hard, expensive and time-consuming—and it was all that much harder to make the trip when my son was a baby.”

“I’m sure that even more women would be interested in going to the mikvah if it would be easier,” says Azulay. “Dvorah has been teaching women so much about the beauty of Jewish life and observance. Many people have made changes in their lives—from keeping kosher to not driving on Shabbat or Jewish holidays—and I am sure that mikvah would be more attractive if we could have a local one that does not involve snakes.”

In order to accommodate the growing need, the Raichmans have recently begun a campaign to construct a beautiful mikvah for the Manaus’s locals and tourists.

A generous donor has already stepped up to sponsor its construction, leaving the rabbi and his wife to raise funds for and locate a suitable piece of land for its development.

“Mikvah is the mainstay of Jewish life,” asserts Dvorah Lea Raichman, “and we are looking forward to bringing this important function to the depths of the Amazon.”