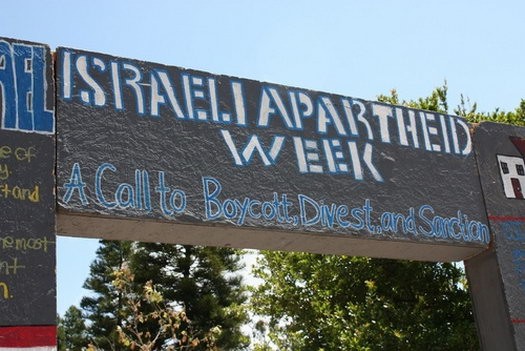 On graduation day June 2015, Emanuelle Hodara, a native of France, proudly accepted her B.S. in Biochemistry with a minor in Biomedical Research from the University of California Los Angeles (UCLA). Hodara and her family left France in 2004, when the resurgent anti-Semitism became too unpleasant. The young immigrant recalls her family feeling targeted everywhere: “in the classroom, in the workspace, from federal officers and from neighbors.”

An aspiring medical student, she dedicated herself to her schooling and was feeling comfortable in the U.S. But an anti-Semitic barb by a fellow student while exchanging congratulations on their graduation, reminded her that she was not quite on safe ground; that anti-Semitism on campus was real and had grown ugly over her four years at the prestigious West Coast university.

In a recent study by Brandeis University in Massachusetts, one-third of U.S. and Canadian Jewish college students reported having been verbally harassed during the past year because they were Jewish. The study, which polled some 12,000 students, found that nearly three-quarters said they had been exposed to at least one of six anti-Semitic statements, including the claims that Jews have too much power and comparison between Israelis and Nazis. Colleges in the University of California (UC) state system showed the highest average levels of hostility toward Jews and Israel.

The situation prompted 32 national organizations representing social, educational, civil and humanitarian causes, to write a letter this past June urging the UC Board of Regents to adopt the current U.S. State Department definition of anti-Semitism as official UC policy.

Chabad on Campus joined Hillel, Jewish fraternity AEPi and 13 other student organizations from various UC campuses asking UC Regents President Janet Napolitano to pass resolutions condemning anti-Semitism that would afford Jewish students the same protections as all other students at the University of California. But in September, Naplitano and UC leaders rejected a proposed statement of principles drafted by UC Provost Aimee Dorr and Vice Provost for Diversity and Engagement Yvette Gullatt, because it failed to explicitly mention anti-Semitism, which prompted the statement to begin with.

“More work needs to be done,” UC President Janet Napolitano reportedly said at regents meeting at UC Irvine. “We want to get it right.” Napolitano instructed another statement to be drafted by students, faculty, chancellors and stakeholders that would speak more directly to concerns of anti-Semitism on campus.

The need for activism to check pernicious anti-Semitism was underscored when a UCLA candidate’s eligibility for a student government position was questioned by Boycott, Divestment, and Sanctions (BDS) activists simply because she was Jewish. The four student senators who challenged her were authors, sponsors and supporters of the most recent anti-Israel divestment bill at UCLA.

The incident drew wide media attention. “A lot of students were taken aback,” says Rabbi Dovid Gurevitch, the Chabad Rabbi at UCLA for 9 years. “They were shocked to realize that this was not only about Israel; it was about their Jewish identity. For a lot of Jewish students coming to UCLA, it is their first time ever encountering anti-Semitism. They never had to deal with it before.”

Hodara remembers another incident during her sophomore year, when she and other students met on the main campus green to hear the results of a student election. While there, she noticed a number of students who brought a large Palestinian flag to the gathering.

“I approached the students and asked them why they were bringing international politics into campus politics. I told them it was inappropriate to bring a contentious issue to an unrelated event.” That was the extent of the conversation.

The following day she was called in by the Dean of Student Conduct and told that a student had filed a complaint accusing her of attempting to physically assault a fellow student.

“Thankfully, the dean trusted my version of the story and the false charges were not put on my transcript, but I could have gotten into a lot of trouble,” Hodara says.

It didn’t use to be this way, says Rabbi Gurevitch. But radicalized elements working to promote BDS over the past two years, and the corresponding and related rise in anti-Semitic activity have led to a hostile, intimidating climate on campus.

In addition to a direct response, Gurevitch believes that enhancing Jewish students’ identity through education, engagement and community building, is strategically critical.

“Many students are alienated from their own Jewish identity or apathetic, so the long-term strategic answer is not demonstrations or a show of force, but rather a stronger sense of their identity and greater engagement in Judaism.”

To this end, the rabbi continues to invest in his classes and programming, leading a class on the Land of Israel, and supporting students one-on-one so they don’t feel intimidated when attacked. On the drawing board at many Chabad campus centers are plans for a Jewish Pride week (a direct response to Apartheid week) at which Jewish students will participate in public displays of pride and solidarity. Whether it is wearing a kippah or Star of David on campus, or affixing a mezuzah to their dorm-room doorpost, encouraging students to stand tall in their Judaism is “the ultimate response.”

At UC Berkeley, Rabbi Gil and Bracha Leeds are also planning a day of Jewish pride with their student board. Chabad’s very presence on campus, says the rabbi, is the solution to the anti-Semitic problem. In his eight years working at UC Berkeley, he’s been regularly harassed as he walks the campus grounds, his rabbinic appearance visible. “It comes with the territory.”

But the rabbi refuses to back down. “When people are trying to intimidate Jews, our response is to be more proud and more assertive of our identity. It just makes us have a stronger resolve to not let them win with their intimidation.”

The positive and joyful Judaism that students find at Chabad, says Hodara, who served as student board president at Chabad of UCLA, gives them a Jewish experience that is not only about “constantly defending ourselves from BDS.”

Last year, just days after a bitter BDS vote at UC Davis, AEPi was spray-painted with swastikas. RabbiShmary Brownstein, director of Chabad of UC Davis, responded to the incident by meeting with fraternity brothers and organizing a Jewish pride Shabbat dinner.

“It turned out to be quite an uplifting experience. Students got up and spoke about why they were proud of being Jewish. The students here refuse to feel victimized by these events and are proud of their Judaism.”  In fact, not long after the student senate adopted the BDS policy, a Jewish student challenged the resolution and the policy was rescinded.

Anti-Israel sentiment often acts as a thin veil for anti-Semitism, Brownstein explains, recalling an incident about three years after he arrived on campus where a sukkah he built on campus was defaced with “Free Palestine.”

Speaking for Chabad on Campus International, Rabbi Yossy Gordon, Executive Vice-President of the division says that Chabad campus representatives are concerned about students feeling vulnerable, and are “very sensitive about providing them with a safe and secure environment where they feel supported.” At the same time, Chabad on Campus is ever dedicated to fostering Jewish identity by taking positive steps forward.

“The stronger and the more united the Jewish people are, the weaker and less effective the forces against us,” says Gordon. Like Gurevitch and the other Chabad representatives working on campus, he insists that increasing efforts to promote commitment to Judaism goes a long way to addressing the problem systemically.

While Chabad staunchly supports Israel as a Jewish homeland, campus rabbis do their best to ensure that every student is welcomed with open arms no matter their politics. UCLA’s Jewish student body of 3,000 comprises less than 10% of the total student population but is a strong representation of its liberal leanings. In fact, a significant segment of Jewish students have been drawn into the anti-Israel momentum; a vocal group of Jewish protesters loudly condemns many of Israel’s policies and actions at campus rallies, unaware, perhaps, that it is often anti-Semitism that drives so much of the anti-Israel activism.

Still, Chabad stays on message: Even if we don’t agree with your views you are welcome at our Shabbat table, say its leaders.

Hodara found that the Jewish student community at Chabad consists of an “eclectic” group of students from a wide range of backgrounds, evidence, she says, that despite their left-wing politics regarding Israel, these Jewish students are just as welcome at the Chabad House.

At UC Berkeley, anti-Semitism is not the only issue the Leeds confront. “Even more troubling at UC Berkeley are the Jewish students who don’t want to be involved at all.”

Attitudes are so polarized at UC Berkeley that many Jews who are uncomfortable with conflict will abandon their involvement in all Israel and Jewish related activities. “Berkeley is a place of extremes. There is extreme zealotry and extreme apathy and that plays out in the pro-Israel/anti-Israel debate,” says Rabbi Leeds.

Ori Herschmann, who is entering his senior year at UC Berkeley, was a Jewish representative in the student senate in 2014, where he actively advocated for Jewish causes. Herschmann, who is majoring in political economy with a minor in public policy, moved to the U.S. from Israel when he was just seven years-old. Although Ori never served in the IDF, as an Israeli-American Jew, he has been harassed repeatedly and has been called a “baby killer” and an “IDF terrorist.”

Herschmann has actively campaigned to protect Jews from anti-Semitic rhetoric and incitement, and his Jewish fraternity has signed on to the recent appeal to the Board of Regents. He credits Rabbi Leeds of Chabad UC Berkeley for helping him navigate the complex and politically-charged issues, and enabling him to grow as a community leader.

“Rabbi Gil and Bracha Leeds have given me a lot of great guidance and the wisdom to make connections and hear what people have to say about Jewish issues.”

But most of all, Chabad, he says, has helped him realize the tremendous need to focus on committing to a strong Jewish identity. “With so much anti-Semitism happening on a day-to-day basis around the world, if we only focus on all the bad, we are risking the future of the Jewish people who may be afraid of being Jewish.”

He says that though “Chabad does a great job at addressing these issues, they do not make them a focal point.” It is vital, he believes, to focus on one’s sense of belonging to the Jewish people and to embrace the true beauty of Judaism.

“When you walk into Chabad, first and foremost, you feel like you are a Jew.”