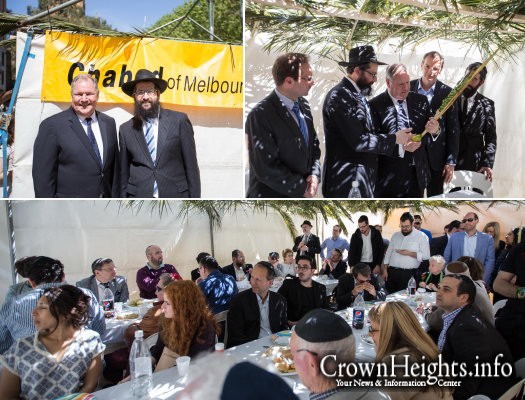 For the tenth successive year, Chabad of Melbourne CBD, led by Shliach Rabbi Chaim Herzog, celebrated the festival of Sukkot by erecting a Sukkah in the very center of the City of Melbourne. On Thursday, 1 October, 2015, it was literally standing-room only as more than 40 people gathered to eat and drink in the City Sukkah and to hear from invited guests, including the Lord Mayor of Melbourne, The Honourable Robert Doyle.

Daniel Mulino noted that Sukkot was a harvest thanksgiving festival, which celebrates our connection to the land, something that he said is important not only for Jews but for all peoples. Especially given the connection of Australia’s First Peoples to the land, he expressed his belief that this would forever remain something important that all Australians can share. Celebrating diversity, he added, is the key to Australia’s multicultural society.

Lord Mayor Robert Doyle remarked that the secret to Melbourne’s success was that Melbourne’s population is made up of people from 200 different nations speaking over 240 different languages and dialects and practicing 105 different faiths “and yet we are one Melbourne and that is quite a remarkable achievement in tolerance and diversity that I think is unmatched around the world.”

David Southwick, a Jewish member of the Victorian Parliament, thanked the Lord Mayor for allowing the Jewish community to erect a Sukkah in the heart of the City, something that should not be taken for granted, given that “there are so many cities around the world where what we are doing here today would not be possible. The fact that we can celebrate multiculturalism, that we can break bread together and we can do it right in the heart of the City if fantastic.”

Rabbi Yaakov Glasman discussed how the period of introspection from Rosh Hashanah, the Jewish New Year, through Yom Kippur, the Day of Atonement, in which Jews are asked to take a serious look at themselves and reflect on whether they were all that we could have been during the past year, gives way to the Festival of Sukkot in which we focus not on what we are doing wrong but on what we are doing right, such as the Jewish community’s proud contributions to Melbourne life that the Lord Mayor highlighted.

“Sukkot is about everybody, regardless of their background or political persuasion, being able to come together, under the one roof, under the stars and just help each other out, just be together as a community”, he said.

Just two generations ago, the idea that it would be possible for Jewish people to sit and celebrate Sukkot together in a Sukkah in the center of the City, licensed by Government, sitting together with the Lord Mayor and politicians from both sides of politics “would have been absolutely unimaginable, unfathomable in any way”, continued Rabbi Glasman. “This is the essence of what Sukkot is about and what makes us so proud to be Victorian.”

Rabbi Glasman thanked Rabbi Herzog for his hard work in making this annual event possible. Rabbi Herzog in turn thanked the speakers for taking the time to attend and making the occasion so special.