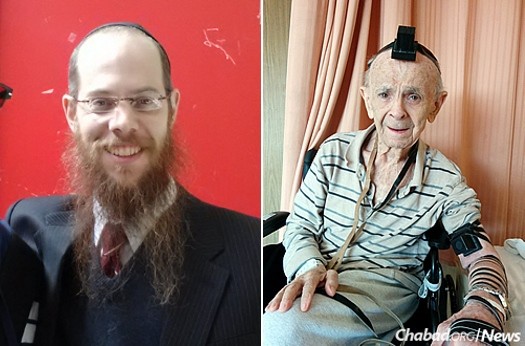 Rabbi Shaul Wertheimer, co-director of Chabad on Campus Queens in Kew Gardens Hills, N.Y., was making his rounds recently at the Franklin Home for Nursing and Rehabilitation in Flushing, N.Y., where he serves as a chaplain. He happened to check in on an 83-year-old man named Irving Malkis, a nursing-home resident from Manhattan.

“He was hard of hearing, and I had to yell,” recalls Wertheimer. “I spoke in both English and Yiddish—I’m not sure which he understood better. I could hear that he had an accent, and I asked where he was from. He said Warsaw [Poland], and told me that he has no family whatsoever living today.”

“I asked him if he would like to put on tefillin today; he said no at first. I told him I would come back later. When I did, I put the yarmulke on his head, I took thetefillin out, but he asked that we go to his room.”

There, “he told me then that he had never put on tefillin before,” and they celebrated his late-in-life ‘bar mitzvah’.

Wertheimer posted this photo on his Facebook page on Sept. 16 and wrote: “Irving was born in Warsaw 83 years ago; today he put on tefillin for the first time. Mazel tov & shana tova!”