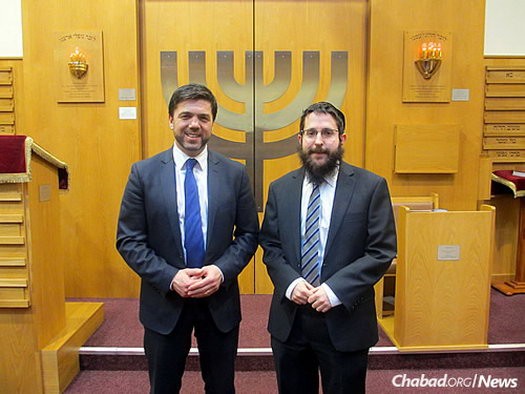 When Jewish people the world over begin putting up sukkahs—the temporary dwellings used during the week-long holiday of Sukkot, which this year begins on the evening of Sunday, Sept. 27—Rabbi Michoel Rose will be adding an additional task to his pre-holiday checklist.

He’ll be prepping for a radio appearance for the community at large in Cardiff, the capital of Wales. Located on the western side of Great Britain, Cardiff—a port city on the southern coast where the River Taff meets the Severn Estuary—is home to some 350,000 people.

Rabbi Rose and his wife, Esther, are Chabad-Lubavitch emissaries in Cardiff under the auspices of Chabad Lubavitch UK Headquarters. He also serves as religious leader of the Cardiff United Synagogue.

As such, he appears on the BBC Wales radio program “Wednesday/Weekend Word” several times each year, discussing issues in the news and lessons related to various Jewish holidays. His radio address this spring before Shavuot, for example, examined justice. An ensuing program before the third day of the Jewish month of Tamuz, the yahrtzeit (anniversary of passing) of the Lubavitcher Rebbe—Rabbi Menachem M. Schneerson, of righteous memory—focused on taking the Rebbe’s message of doing good out into the greater world.

And the Roses do go out in the world.

“Being representatives of the Orthodox Jewish community in South Wales means we attend civic functions, such as the national Remembrance Day in November, and other high-profile events. We also liaise with other faith leaders about things that may affect the community,” explains the rabbi, who was born and raised in Leeds, England, and then lived in Manchester, England, before moving to Israel for a number of years.

Given such media appearances and communal duties, the Jewish community of Cardiff would seem to be quite large. In actuality, it’s rather small. About 800 Jews live in the city, with about 2,000 mostly older Jews across the country in total.

According to Esther Rose, who was born to Israeli parents in Tucson, Ariz., and has lived in several cities across the United States, “Cardiff once had a very large [observant] community.” But with a limited Jewish infrastructure—there were no Jewish elementary or high schools—a number of families left Wales. Others moved to pursue opportunities beyond the local borders.

“The people who are left are generally elderly and more traditional,” she says. “They have a general Jewish knowledge, and can daven [pray] and read from the Torah.”

In addition to Cardiff, a very small community of some 160 Jews lives in Swansea, about an hour to the northwest. The last remaining synagogue there was sold, and services are now held in a leased space on Friday nights and on Jewish holidays. A Chabad rabbi travels there to lead services for the High Holidays.

The Jewish community of Wales, which is part of the United Kingdom, traces its history to the mid-19th century, when Jews fleeing persecution came to the country from places like Russia and Eastern Europe. A second wave of Jews came during World War II. The community reportedly once had as many as 5,000 members and lived in several different cities across the countryside, including towns like Newport and Merthyr Tydfil. In these cities, once-grand synagogues have since been sold.

But in Cardiff, some of the basic foundations for a thriving Jewish community exist. A minyan is offered daily at the Cardiff United Synagogue, and a functioning mikvah is housed on the synagogue grounds. Kosher food is delivered from London twice a month.

And last Chanukah was remarkable in that the city’s first public menorah-lighting took place outside the Mansion House, built in 1896, which serves as the official residence of the Lord Mayor of Cardiff. At the time, the rabbi said: “We are so happy that Cardiff is now on the map of communities that display a public menorah, thanks to the efforts of our local communities and the work of our center.”

“The community in Cardiff is small in number,” acknowledges Esther Rose, “but they make up for it with their Welsh enthusiasm and commitment toYiddishkeit.”

Still, she adds: “The biggest challenge we face is simply one of numbers. There just aren’t many Jews here, and even fewer young ones for our kids to play with.”

Yet there are signs of growth.

“A handful of families have moved to town, mostly Israelis, and a couple of younger single people, so there is hope for the Jewish future here,” she adds.

To that end, the community celebrated a bar mitzvah this past spring—“a once-a-year event” in Cardiff—held a Lag BaOmer bonfire, and marked Shavuot with an ice-cream and cheesecake party, followed by a communal meal. That’s in addition to the regular slate of programming that the Chabad couple runs, including a Sunday school.

“The Roses are at the heart of the community,” says Ilisa Factor, who has two children in the Hebrew school. “They have a warm, friendly and supportive approach, and are inclusive across the generations. They arrange a variety of events, talks and meals, which appeal to all members across the community.

“Their warmth stretches further than Cardiff, too, ensuring that the smaller communities in Swansea and Newport are also welcome to events and services,” continues Factor. “They are wonderful ambassadors for the Jewish people.”