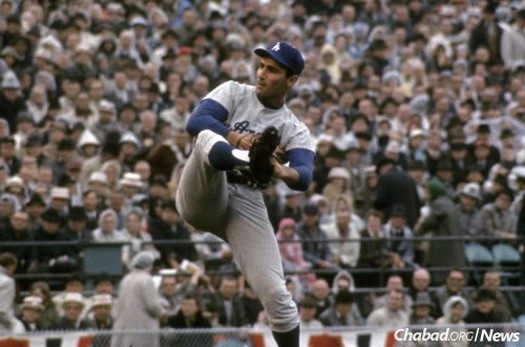 After not pitching the first game of the 1965 World Series because it was played on Yom Kippur, Sandy Koufax won games 2, 5 and 7, and was awarded “MVP” of the series.

When Sandy Koufax decided not to pitch in Game 1 of the 1965 World Series because it fell on Yom Kippur, he became an instant hero for many Jews across the country.

He was still able to help his team—the Los Angeles Dodgers—starting in games 2, 5 and 7, and they went on to win the title, beating their rival the Minnesota Twins. Koufax was even awarded “Most Valuable Player” of the series.

That was 50 years ago, but his actions have had a lingering effect to this day. After all, it was a big move on a very big stage, and it could have had real repercussions on the outcome of the game—and Koufax’s career.

In the end, it also said a great deal about the character of Koufax, a discreet man who apparently tried to avoid the center stage, even as Yom Kippur approaches and with it, much talk of five decades of making a public Jewish statement.

Fast-forward to September 2015, when the St. Louis Cardinals scheduled “College Night” on the evening of Tuesday, Sept. 22, minutes before the start of Yom Kippur. When the date was made known, Jewish students who observe the holiday realized that they wouldn’t be able to attend.

Yom Kippur, the Day of Atonement, is the holiest day on the Jewish calendar. For nearly 26 hours—from several minutes before sunset on 9 Tishrei to after nightfall on 10 Tishrei—Jews abstain from food and drink, and recite prayers of repentance in synagogue.

But rather than stew in their disappointment, students and staff at the Chabad on Campus Rohr Center for Jewish Life at Washington University in St. Louis decided to organize an alternate event at the game on Thursday, Sept. 24, to honor the 50-year anniversary of Koufax’s famous decision.

“We wanted to pay homage to Sandy Koufax by sitting in synagogue for Kol Nidre and going to the ballpark on a different day,” said Rabbi Hershey Novack, director of the Washington University Chabad.

The decision to attend a Cardinals game a different night is another example of how Jews manage to navigate a life in which they observeShabbat and other holidays, and still participate in integral parts of American life.

In Koufax’s case, he was not particularly religious and was well-known for shying away from the spotlight. Most historians agree that his actions were not aimed for public attention.

“There was never any decision to make,” he wrote in his autobiography. “Because there was never any possibility that I would pitch. Yom Kippur is the holiest day of the Jewish religion. The club knows that I don’t work that day.”

Novack wasn’t born when the 1965 World Series took place, but he is well-aware of the impact of Koufax’s decision. “When he sat out in the World Series—in a very different era—it had a very positive effect on a generation of young Jewish baseball fans,” said Novack. “Here was a highly successful Jewish baseball player indicating to America that he places Judaism above sports. That was an incredible message that still resonates today.”

The genesis of the Chabad event came when students saw on Facebook that their peers were planning to attend the game on the holiday. They brought it to the attention of the Chabad Student Association, an undergraduate club affiliated with the university that Novack advises.

“I wouldn’t say I was upset” about the Cardinals schedule, he said. “Let’s realize that 98 percent of college students in the St. Louis area are not Jewish, so let the Cardinals sell them tickets.’”

Alex Griffel, a leader of the Chabad Student Association helping to organize the event, recalled thinking after he learned of the scheduling conflict that: “It’s uncomfortable that there will probably be Jewish students who are put in a position where they might want to go to the game, and we should do something on a different night so they have an alternative and come to Yom Kippur.”

While certainly not as important as observing the holiday, Griffel said that attending a Cardinals game is something college students in St. Louis should be able to do.

“Even if you’re not a baseball fan, the Cardinals are hard to escape. They are an omnipresent part of St. Louis day-to-day life,” said Griffel, a senior at Washington University who is studying English literature. “I think living in St. Louis, it’s sort of your responsibility to understand Cardinals culture a little bit.”

Add to that the fact that there is a longstanding tradition of Jews loving baseball, documented in the recent exhibit, Chasing Dreams: Baseball and Becoming American, at the National Museum of American Jewish History in Philadelphia.

Like Judaism, said Griffel, who describes himself as Orthodox, “baseball is something you get from your parents, from your grandparents. It’s a challenge to be a religious Jew who loves baseball because there have been a lot of important baseball moments that have happened on Shabbat and Jewish holidays.”

(He can recall from memory that Mets pitcher Johan Santana threw a no-hitter on Friday night, June 1, 2012. But since the game took place on Shabbat, he didn’t see it.)

“I would love to be watching those games, but I make a commitment to Judaism,” said Griffel, a native of Long Island, N.Y.

The Chabad organizers reached out to the Cardinals about their event, and also plan to include students from area schools such as Saint Louis University, Webster University and the University of Missouri-St. Louis.

They plan to make T-shirts for the game between the Cardinals and the Milwaukee Brewers, and actually send one to Koufax and the Dodgers. The shirts, however, will be red. Koufax, who still assists the Dodgers in spring training, may wind up keeping with tradition—and wear blue.

“[While] we’re not a baseball-boosting club,” Novack said of the college Chabad House, “gathering students together for a baseball game and recognizing Sandy Koufax’s Jewish heroism seemed close enough to our mission to make it happen.”