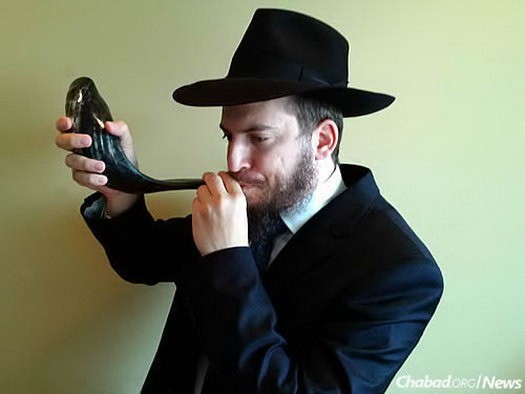 Rabbi Leibel Fine, co-director of Chabad Dollard in Canada, has a tradition of blowing the shofar for the homebound on Rosh Hashanah.

Allan Sheff “will never forget” when Rabbi Leibel Fine came to his doorstep with a shofar in hand.

“It was the first day of Rosh Hashanah, and I wasn’t feeling well and hadn’t been able to attend synagogue. That afternoon there was a knock at the door, and there was Leibel, who’d recently arrived with his wife, Chana, to establish a Chabad House.

‘I heard you weren’t in shul,’ he told me, ‘so I came to blow shofar for you.’ It was a very special moment that really personifies why Chabad is so unique,” says the Montreal resident, who says he now regards Fine as an “adopted son.”

For his part, the rabbi, co-director of Chabad Dollard in Canada, says that what he did for Sheff is exactly what his counterparts throughout the world have been doing for decades: working to ensure that every single Jew has the opportunity to hear the shofar, the central observance of the holiday of Rosh Hashanah, which will be celebrated this year beginning on the evening of Sunday, Sept. 13, and lasting until the evening of Tuesday, Sept. 15.

In fact, a journal published by Lubavitch Youth Organization in 1961 displays a list of nearly 50 young men who fanned out on foot across Brooklyn, N.Y., and beyond to blow shofar for the bedridden, including those in nursing homes and hospitals.

Rabbi Eliezer Zalmanov, co-director of Chabad Lubavitch of Northwest Indiana in Munster, Ind., says his entire family of eight comes along for the walk. “After we finish services and the holiday meal, we get on our sneakers and strap the little ones into the stroller, and set out to visit our Jewish neighbors who may not have been in services that day.”

They also make a stop at the athletic field of a nearby public school, where Jewish athletes and coaches gather around for what has become an annual tradition.

The rabbi says the custom began the very first year that he and his wife, Chanie, moved to Munster.

“Dear friends, who were actually hosting High Holiday services in their home, told us that they had a neighbor who was Jewish,” he goes on to explain. “We knocked on his door with shofar in hand. His wife, who was not Jewish, answered the knock and told us that her husband was in the hospital. Of course, we set off walking to the hospital. By the time we arrived, the wife was already there. She was so surprised that we’d taken the long trek just for her husband.

“I blew shofar for him and spent a few minutes speaking even though I could not tell if he was conscious. He passed away soon after. The wife wrote a letter to our hosts telling them how meaningful it was to her that her husband got to do one more Jewish thing before passing away.”

‘Light to That Universe’

Often, the stories have happier endings.

Rabbi Yisroel Gurevitz—who co-directs Chabad of Kiryat Krinitzi in Ramat Gan, Israel, with his wife, Rivka—says that the sounding of the Rosh Hashanah shofar served to change one man’s relationship to Judaism in a very positive way.

“I was told that there was a man in my neighborhood who was very not healthy. He was wheelchair-bound and had problems with his blood. I decided to visit him with the shofar on Rosh Hashanah,” recounts the rabbi. “I’d visited him before on other holidays, and why should Rosh Hashanah be any different? When I showed him the shofar, he told me he had never heard it before in his life. He was 79 years old at that point and lived two minutes away from a synagogue. Well, there’s a first time for everything.

“Today, he wears tefillin on a daily basis and has become much healthier physically,” the rabbi reports. “And he ‘blames’ his turn for the better on his newfound Judaism.”

“I was first alerted to the need in our community,” says Rabbi Shimon Gruzman, who co-directs Chabad of Castro Valley, Calif., with his wife, Chanie, “by a woman who asked if I could perhaps blow shofar for her grandfather, who lives in Castro Valley [near San Francisco]. At the age of 96, he was not able to get out, but he still wanted to observe the central ritual of this holiday.”

“Can you imagine the isolation and disappointment of these people, many of whom are elderly?” asks the rabbi. “For 70, 80 or even 90 years, they never missed a shofar-blowing, and now they are spending Rosh Hashanah alone in silence.”

Expanding a program started last year, the rabbi will be coordinating “House Calls” for Jewish people who cannot make it to synagogue on either of the two days of the holiday.

The name “House Calls” plays off the double meaning of “call,” indicating both the personal visit, and the sound of the shofar.

This year, the rabbi plans on enlisting the help of two rabbinic interns who will accommodate the requests that have already begun to accumulate.

One challenge faced by the shofar-blowers is that Jewish law prohibits driving on the Sabbath and Jewish holidays. As such, each visit can take the volunteer shofar-blowers many hours.

Yet Gruzman insists that “time and effort are not the issue. Each individual person is an entire universe, and if we can walk for an extra hour or two to bring light to that universe, that is the best way to possibly start the New Year.”

To request a home visit for yourself or someone in need this Rosh Hashanah, contact your local Chabad center.