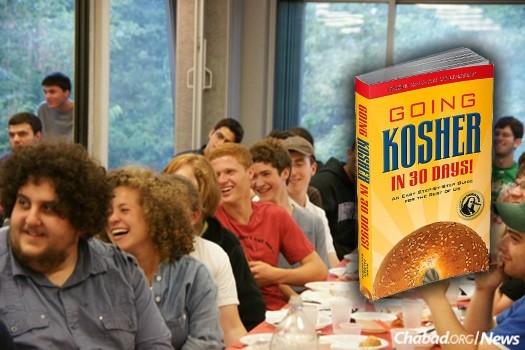 For many young adults, college is a time to find themselves, making decisions on everything from their academic majors to their peer groups, social lives and daily schedules. For some, it’s also the first time they have been in charge of one of their most basic necessities: what to eat.

Once they get to campuses in the United States and around the world—specifically, those schools with significant Jewish student populations or the presence of a campus Chabad center—young Jewish men and women can grapple with the idea of eating kosher.

Chabad on Campus International can help them do so, by giving them the tools they need to learn about this mitzvah and how to go about observing it.

To that end, Chabad-Lubavitch emissaries are distributing 2,500 free paperback copies of Going Kosher in 30 Days! by Rabbi Zalman Goldstein to college students at various locations across the country. It’s timed to the start of the new academic year.

“We are delighted to be able to offer this practical resource to students who seek to explore this fundamental mitzvah of eatingkosher,” says Avi Weinstein, director of administration at Chabad on Campus International.

The giveaway, which is being underwritten by the Rohr Family Foundation, comes as the Chabad movement marks the 40th anniversary of the kashrut campaign launched by the Lubavitcher Rebbe—Rabbi Menachem M. Schneerson, of righteous memory—back in 1975.

“A person’s nature depends in a very large extent upon the foods and drinks that he consumes for they become transformed into one’s flesh and blood,” theRebbe declared in a speech on June 25, 1975. He went on to say that “in order for the mind to be lucid and to reach clarity in its comprehension, one’s food must not be coarse and crude, for that would affect one’s intellectual powers.”

Subtitled “An Easy Step-by-Step Guide for the Rest of Us,” Goldstein’s award-winning work—it earned aBenjamin Franklin Award from the Independent Book Publishers Association in 2008 after being first issued as a hardcover—isn’t specifically written for college students. Meaning, it’s geared to potential kosher consumers, period, in a serious and thorough way.

Still, it does break down the rules about what kosher is and isn’t in a breezy, comprehensible and relatable manner.

In the book, the author notes that living on one’s own is perhaps the easiest time to make the move to keeping kosher because “you can shop and prepare your food any way you want.”

He provides readers with different steps to take each day as they move forward in their journey to keeping kosher. That way, notes Goldstein, kashrut can be gradually introduced into people’s lives. There is also a section on eating out, with practical tips and guidelines.

“Of course, your goal is to go kosher quickly, successfully, permanently,” the rabbi tells the reader. “However, doing too much too soon can cause you to become overwhelmed and maybe a bit discouraged, putting yourself at risk to going back to the starting point.”

Given how much juggling college students do already, the gradual approach seems like a sound approach, speaking to students one lesson at a time.