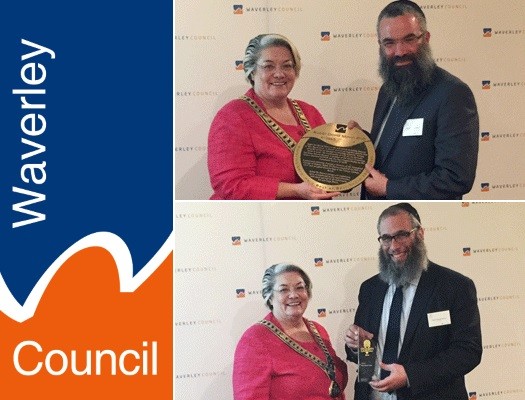 Two Chabad rabbis have won prestigious awards from Sydney’s Waverley Council for their contribution to the well-being of the local community.

Rabbi Mendel Kastel, CEO of the Jewish House, has received an award from Sydney’s Waverley Council naming him Local Hero for 2015.

At the ceremony held at the Eastern Suburbs League Club at Bondi Junction, Our Big Kitchen’s Rabbi Dovid Slavin received the “Best of the Best” award for the contribution his activities have made to the community at large.

Rabbi Slavin’s name will feature on a bronze plaque which will be placed shortly somewhere on the coastal walk between Bondi and Bronte beaches.

Waverley councillor Leon Goltsman told J-Wire that there was great deal of significance in the award made to Rabbi Kastel as “it was not just for the Jewish community but for everyone”. He said that he felt proud as in the thirty-eight years he has lived in Sydney he has seen the community “come such a long way.”

Both rabbis said they were extremely proud to be recipients of their respective awards.

The awards were presented by Waverley Mayor Sally Betts in the presence of NSW Attorney-General Gabrielle Upton.