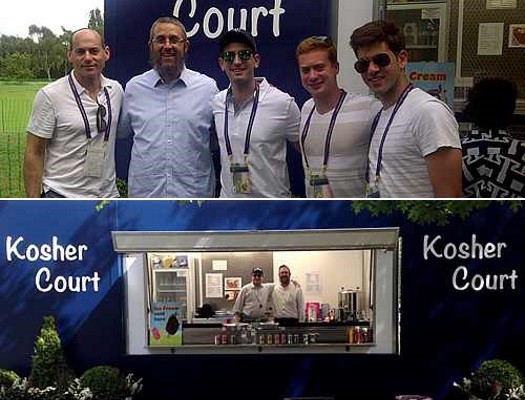 The scent of a freshly mowed lawn that comes with being the only Grand Slam played on a grass tennis court. The pristine white tennis outfits required of all players, to the exclusion of off-white or cream. Bowing or curtsying towards the Queen or the Prince of Wales if they are watching from the Royal Box.

Tradition lies at the very heart of the Wimbledon Championships, founded in 1877, and today the world’s oldest and most prestigious tennis tournament.

Nearly 500,000 tennis enthusiasts from around the globe have descended on the suburban Wimbledon district of South London since the tournament opened on June 29 (it ends on Sunday), among them thousands of Jews. For the seventh year in a row, they can take part in the millennia-old Jewish tradition of eating kosher food, and one of Wimbledon’s newest traditions: Kosher Court,Chabad of South London’s kosher-food stand. Located across the street from the All England Lawn Tennis Club, Kosher Court serves out helpings of hot dogs, burgers, baked potatoes, and strawberries and (nondairy) cream—yet another Wimbledon ritual.

The stand offers local and visiting Jews the chance to eat kosher food, say a blessing or put on tefillin. It also gives Jews from all walks of life the chance to connect with one another.

Historically, London’s Jewish community has been on the northern side of the Thames River. In 1988, Rabbi Nissan and Sarah Dubov established Chabad Lubavitch of South London in Wimbledon to service the less developed and smaller Jewish community on the southern bank.

The popularity of the two-week-long tennis tournament means that in addition to catering to the 9,000-strong local Jewish community, the Chabad center reaches out to the thousands more Jewish tourists and tennis fans who flood the area to witness the matches.

“During these two weeks, the whole world comes to Wimbledon,” proclaims Rabbi Dubov.

While in the beginning the kosher-food stand came as a surprise to some, by now “the world has changed such that if you’re Jewish and you’re coming to Wimbledon, you’ll think of us. You’ll Google Chabad here, come to our website and see all of the services we’re offering: kosher food, mikvah, shul and facilities.”

‘A Lot of International Guests’

In 2008, the Dubovs were joined by Rabbi Dovid and Sora Cohen, who direct Chabad on Campus in the South London area. It is Rabbi Cohen who runs the Wimbledon kosher stand, which initially started out of Chabad’s driveway before moving to a prime location within the tournament grounds.

“We see a lot of international guests—Jews from England, throughout Europe, America, South Africa; we hear a lot of different languages,” says Cohen. The stand’s spot adjacent to the line of people waiting to procure coveted tickets for the matches—people camp out, sometimes for days for the chance to get seats—means that many more people will stop by as the line slowly snakes its way to the ticket booth.

Cohen is assisted by two rabbinical students, Yaakov Shusterman and Mordechai Harlig, who as part of Chabad’s “Roving Rabbis” visitation program interact with the multitudes as they come by, offering them the chance to put on tefillin or helping them in any other way.

“Last week, one British fellow came by and was at first reluctant to put ontefillin after the yeshivah students asked him to,” relates Cohen. “He finally agreed, and it ended up that it was his first time, so we made him abar mitzvah. Later that day, I met a Jewish family from New Jersey, telling them about our work and mentioning the tefillin story from earlier. The father was surprised; he asked me, ‘You have tefillin? I forgot mine at home and usually never travel without them!’”

Cohen happily lent a pair to the man before helping the fellow’s two sons and son-in-law put on tefillin as well.

After seven years of being on the sidelines of Wimbledon, has Cohen ever gone in to see the world’s best tennis players battle it out, the concentrated silence broken only by the sharp “plonk” of the ball hitting grass and the occasional grunts of the straining players?

“I’ve never actually watched a tennis match,” admits Cohen. “Our job here is to provide a warm Jewish meeting spot for people to grab a kosher bite to eat and do a mitzvah.”