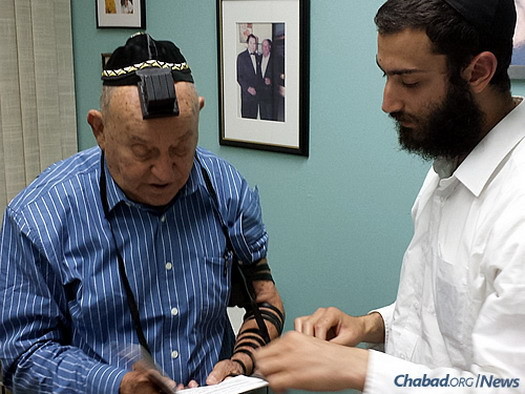 Rabbinical student Mendel Marasow wraps tefillin in the office of David Cibul, an active member of the Jewish community in Aruba.

In this second installment in a series of articles on the unique lives of Chabad-Lubavitch yeshivah students, Chabad.org writer Mindy Rubinstein examines the daily life Lubavitcher Bochurim who have already graduated from their respective Yeshivahs. A series featuring the lives of female students is in the works as well:

Young men in yeshivah likely reach tens of thousands of people around the world—local residents and business people they regularly visit on Fridays after their studies are done and before Shabbat starts, offering Jewish practice and knowledge. But as they get older, their work can also bring them to other, more remote places—physically and spiritually.

With summer in full swing, many of the more senior students are on the go, adding to the miles of travel they have already accumulated.

Mendel Marasow, for example, has been all over the world. The 24-year-old rabbinical student from Montreal spent time in Kenya last fall for part of the High Holidays. He has also traveled to Columbia, Peru, Argentina, the ABC Islands in the Caribbean, Greece and Germany.

“Throughout the year, we study a full day,” he says. “When the yeshivah closes during the holidays, some boys choose to go home, and some go to other communities that don’t have a rabbi and could use the help.”

Such is the case in Nairobi, the capital and largest city in Kenya. The local Jewish community boasts a more than 100-year-old synagogue—the Hebrew Congregation of Nairobi—but no rabbi to lead it.

“It’s very difficult to live in Africa as a Jew,” says Marasow. “Things we have in North America, like basic security, they have a compound surrounded by live wire.”

Over there, he and a friend led services and directed children’s programs, ran arts-and-crafts projects and held a large party for the holiday of Simchat Torah. “They don’t get much Jewish education at all in Kenya,” he says.

About 150 Israelis come for business throughout the year, and a handful of large Israeli companies are headquartered there. Another 120 or so local Jewish people reside there year-round.

“The people are really looking for Judaism,” attests Marasow. “In America, you don’t feel so isolated, but in Africa, you really don’t associate with the people around you. They are different—different foods, different value system, different lifestyles.”

And yet, he marvels, “it’s actually harder to lose your identity as a Jew in Africa than it is in America.”

Even though the synagogue has a compound and is surrounded with guards (and he and the other students had a security guard at the beginning of their stay), Marasow felt he didn’t need one.

Africa, he states, is not as intimidating as people often believe: “It’s a very nice community. The Jewish community gets along very well with the local people.”

During the year when Marasow learns at yeshivah, he goes to Manhattan on Fridays to visit busy professionals in their office buildings—putting on tefillin, and teaching about Shabbat, the weekly Torah portion and Judaism in general. Some offices he frequents every week, noting that “you build relationships, and you have a route that you follow.”

“The Rebbe [Rabbi Menachem M. Schneerson, of righteous memory] knew that some people are more into study, and some more into getting out [and about]. The Rebbe demanded 100 percent devotion. We should do both properly,” he explains. “Even though a yeshivah bochur is someone who learns, we should also go out into the world. That can be a different way of learning.

“Studying Torah is very important. Going out and giving back to the world is also important. They don’t contradict each other.”

Recently married, he is spending the summer with his wife in Crown Heights, learning part-time in a Chabad House on Manhattan’s Upper East Side.

‘Inspiration From Deep Inside’

Dovid Lew, 22, just obtained his semichah (rabbinical ordination); up until that point, he was immersed doing outreach in South Palm Beach, Fla.

Fridays meant going out to the nearby streets of downtown Lake Worth, asking people if they’re Jewish—wrapping tefillin on men and giving out Shabbat candles to women. He continues to make connections and forms relationships, and lets people know about the local Chabad.

Lew, who grew up in the Crown Heights neighborhood of Brooklyn, N.Y., has traveled to San Diego doing mitzvah work and up the West Coast to San Francisco; Portland, Ore.; and Seattle. He also spent a year in Paris on shlichusand has been all over New York, New Jersey and Connecticut helping Chabad emissaries.

Last summer, he spent time near Atlanta, helping affix mezuzahs in people’s homes and businesses. There, he also spent time with an elderly woman in a retirement home. “I just listened to her for three hours,” recounts Lew. “She was so grateful to speak with someone. She was really lonely. That was one of the highlights of my visit.”

He is spending this summer in Israel, learning with and helping people at a yeshivah for baalei teshuva (“returnees to the faith”) in Safed.

Lew plays the piano and the Native American flute, a hand-crafted wooden instrument. He taught himself to play both instruments, and occasionally shares his musical talents in the community during events. He sings as well.

“The Rebbe said a person cannot be Jewish by himself,” he explains. “Having a relationship with G-d can’t just be about me and G-d. I cannot be whole unless I’m helping other people be close to G-d.

“I see that in myself,” he continues. “When I teach something, I get a better grasp of it. When I’m out talking to people, inspiration comes from deep inside me, and what I learn becomes more meaningful when I’m helping others.”

Recently home in Crown Heights for Gimmel Tammuz, Lew was immersed in observance of the 21st anniversary of the Rebbe’s passing. He notes that the Rebbe states three loves in Judaism: of G-d, of Torah and of other Jews, saying “one cannot differentiate between them, for they are of a single essence … And since they are of a single essence, each one embodies all three.”

As Lew believes, “You cannot have one without the other two. If you’re lacking, however, and you work on the love of other Jews, you’ll get the other two. Helping people has to be a priority.”