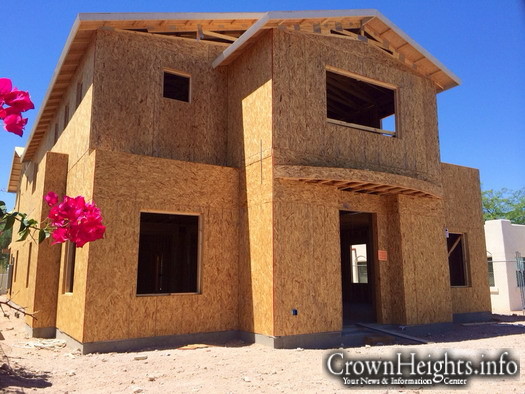 When Rabbi Yossi and Naomi Winner first moved to Tucson to start Chabad at the University of Arizona in 2005, they hosted Shabbat dinners in their two-bedroom house. By the end of the first year, they had nearly 100 students joining them, so they purchased a large tent for the backyard, outfitted it with an air-conditioning unit and converted it into a makeshift Chabad house. “We work with what we have,” says Rabbi Winner.

For the past nine years, the couple have hosted High Holiday services, Shabbat meals and Passover seders – the latter with approximately 500 students over the two nights, the rabbi says – in this campsite setting. Now, Chabad at U of A is building a permanent home.

When they founded Chabad at U of A, the couple received a grant from the Rohr Family Foundation for the first four years to get started on campus and by the end of four years, they were responsible to raise their entire budget. “The dream to have a Chabad house was always there from the beginning, but it took time to come to fruition,” Winner says.

When the couple were ready to make the move to a new location, they were unable to find property for sale near the university, so they decided to purchase land and “build a custom-fit Chabad house,” Winner says.

They received a building grant from the Rohr Family Foundation and launched a $1.5 million campaign to raise funds. With this grant, as well as support from parents, grandparents, alumni and a bank loan, the couple has raised all but $450,000 to complete the project.

The new 6,000-square-foot facility, the Rohr Chabad Jewish Student Center at the University of Arizona, is expected to open in December 2015. The Winners will live on the second floor with their five children – four boys ages 3-9 and a girl, 1. The main floor has a room large enough to host about 150 people comfortably and there’s space in the yard to hold the tent for larger events, Winner says. There will also be a large kitchen, a student lounge, a basketball court, a barbecue patio and classrooms, as well as two guest bedrooms with private quarters for students who want to experience a full Shabbat.

The new building will be located at 1436 E. Drachman, near the Alpha Epislon Pi fraternity house, and links to the heart of campus life through an underpass.

Winner estimates that, of the 4,000 Jewish students on the campus, more than 50 percent are from the Greater Phoenix Jewish community. Since many of the students are far from their homes, Winner says that he and his wife felt that the best way to reach out to the students was by having a family setting that opens their home to students. He and his wife have personal connections with the students, and their children interact with them, as well.

Matt Feinman, who attended U of A in 2005-2009 and now lives in the Valley, told Jewish News that Chabad at U of A is a great benefit to Jewish youth in many ways.

“First, it provides a home away from home for any student,” he wrote in an email. “Obviously, the goal of Chabad is Jewish outreach, but the door is never closed to any individual who is interested in Judaism. With this, Rabbi Yossi and his family are extremely warm and welcoming individuals who make everyone feel comfortable. Most importantly, Naomi Winner is an excellent cook and when you are missing a home-cooked meal, there is nothing better than Shabbat at the Winners’ home.”

Feinman is grateful for Chabad’s role in providing opportunities for Jewish students from different backgrounds to meet each other and says that Chabad at U of A changed his life.

He and his wife, Rebecca, met at the Winners’ house and became the first married couple who met there. “I could never repay the Winners for the happiness they brought me,” he says.