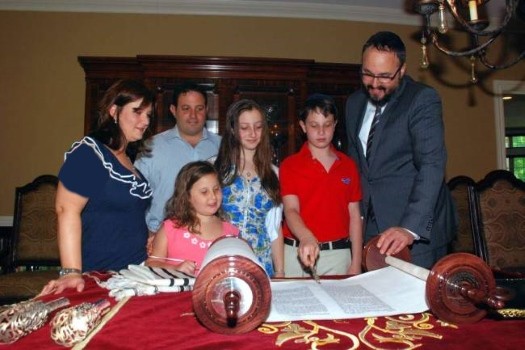 A family has offered the ultimate contribution to the synagogue it attends to commemorate a rite of passage for one of its members.

Craig and Ruanne Sher have donated a Torah to the Chabad Jewish Center of Northwest Bergen County in Franklin Lakes, which it celebrated in a ceremony on May 29.

“The Torah embodies the Godly word,” Rabbi Chanoch Kaplan said at a gathering at the Sher’s home prior to the presentation of the Torah at the synagogue.

“This comes at the perfect time — it’s on the bar mitzvah of the Shers’ son, Davin.”

Craig Sher, a native South African, said he was thankful he and his family were able to make such a contribution — the second they have donated to the Chabad, in fact.

“It is our pleasure to do this on this occasion,” he said.

Kaplan said a Torah can cost $28,000 to $60,000. The cost is largely due to the means by which they are created: They are traditionally hand-written. The scribe of the one donated to the synagogue on May 29 was Rabbi Shalom Kass of Rockland, N.Y.

“There are so many other things a family can spend that amount of money on,” he said. “This family chose to further the word of God.”

Kaplan said the Chabad Jewish Center now has four Torahs, two of which were “used’ when acquired. He said synagogues need several Torahs because the scrolls are read up to three times each day and at holiday services.

“There is a lot of wear and tear, even though they are handled carefully,” he said.

During the ceremony that ushered in the new Torah, Davin was the first to read from it, and he and his family filled in parts of the final letters that end the writings, which conclude with the death of Moses.

“For 3,326 years, the Torah has kept us together as a people,” the rabbi said. “The Shers offering is a commitment to the word of God and to the mission of remembering the words which Jews live by.”