« Residents Want S. Johns Place to Become 1-Way Street
Picture of the Day: A Gift for the Governor » 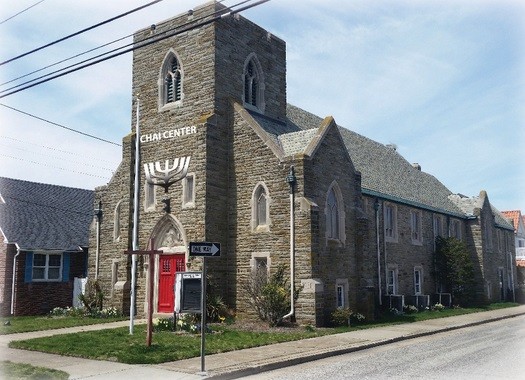 Chabad at the Shore in Atlantic City, NJ, directed by Rabbi Avrohom Rapoport, and head Shliach of Atlantic & Cape May Counties, Rabbi Shmuel Rapoport, announced the purchase of a former Episcopal Church, which – after thorough renovations – will become a center of Jewish outreach.

From the Jewish Community Voice:

Chabad at the Shore has announced plans to purchase a building at 6605 Atlantic Avenue in Ventnor as its new home. The former Episcopal Church, located just blocks away from Chabad’s current shul, is tentatively scheduled to open as “The Chai Center” on August 9 after undergoing $200,000 worth of renovations, said Chabad at the Shore director Rabbi Avrohom Rapoport.

At the Voice’s deadline, Chabad was scheduled to close on the building, which cost just under $1 million, on June 10.\

The new 10,000-square-foot “Chai Center” will comprise a “campus” of several buildings. According to Chabad’s website, the main building will house a 250-seat sanctuary; a social hall; “hospitality rooms” for visiting scholars and guests; a rabbi’s study, library and office suites; and a commercial kitchen which will also offer kosher catering services. A separate school building will hold several classrooms, offices and an additional kitchen.

“There is also a beautiful outdoor space,” said Rapoport, where Chabad plans to have a playground, garden and “sukka plaza.”

A flood prompted Chabad’s new building purchase. In December, Chabad’s Ventnor Shul, located at 6412 Ventnor Ave., was forced to close when frozen pipes at a neighboring establishment caused substantial flood damage, said Rapoport. Chabad then moved its base of operations to Rapoport’s home and began intensifying its ongoing search for a new location.

“We had been searching for a home for our growing organization for several years,” explained Rapoport. “The way we see it, Hashem had a plan for us, and here we are.”

Click here to continue reading at the Jewish Community Voice.

« Residents Want S. Johns Place to Become 1-Way Street
Picture of the Day: A Gift for the Governor »