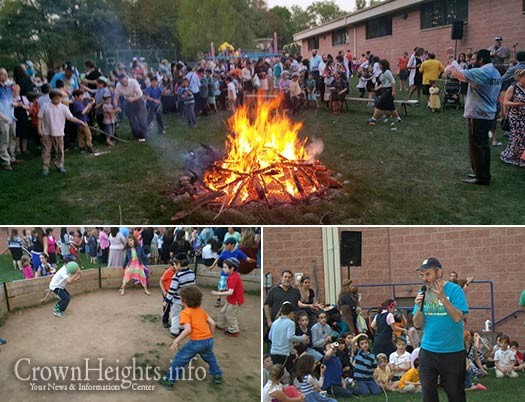 Over 300 Jewish men, women and children of all ages and backgrounds attended an upbeat, informal Lag BaOmer event hosted by Chabad of Rockland County.

Chabad of Rockland County, under the leadership of Rabbi and Mrs. Avremel Kotlarsky, held its annual Lag B’Omer event on Tuesday, May 7 at its upstate Chabad Jewish Community Center.

Over 300 Jewish men, women and children of all ages and backgrounds attended the upbeat, informal family picnic from 5:00 to 8:00 p.m.

A group of ten teen volunteers from Monsey Beis Chaya Mushka High School did a wonderful job manning the food concession stand all afternoon, handling a long line of participants waiting patiently for hot dogs, burgers and other fresh goodies.  The grill was expertly handled by community member Shay Keren and crew.

Live music was provided by community member Ami Weinberg on acoustic guitar and vocals, backed by the very talented Sruly Kotlarsky on keyboard.

Children were busy enjoying a petting zoo and pony ride, face painting, inflatable rides and, of course, the Chabad center’s spacious and well-equipped playground and courts.

Rabbi Simcha Morgenstern, Director of Outreach and Education, was pleased with the tremendous turnout.  “Rockland County is home to many different Jewish communities,” he said.  “Here at Chabad we’re all one.”

The highlight of the event was the Lag B’Omer, at which Rabbi Kotlarsky explained the significance of the day and led the children in the Twelve Pesukim. The fire was then kindled, and marshmallows were soon being roasted while live music kept the crowd in high spirits.

Special thanks go to community members Jeff Koenig for sponsoring the inflatables, and to “volunteer in chief” Kim Rose whose invaluable involvement ensured that all event logistics were proficiently covered.