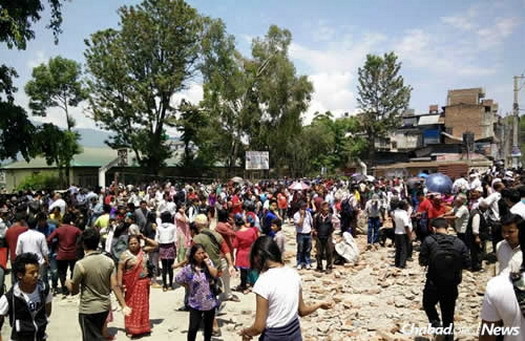 After the new earthquake people poured into the streets of Kathmandu, with more than 100 taking refuge in the Chabad House.

Suffering its second major earthquake in less than a month, a powerful 7.3 magnitude quake shook Nepal today, with initial reports of dozens of deaths, thousands of injuries and significant damage in the eastern parts of the beleaguered nation.

Buildings shook in the capital city of Kathmandu, and the airport was closed amid numerous aftershocks. Fearing the collapse of buildings, people took to the streets during and immediately after the quake, with many flocking to theChabad center in the city, which has been a source of refuge and aid for weeks.

Rabbi Chezky Lifshitz, co-director of Chabad of Nepal with his wife Chani, said soon after the quake that 133 Israelis have again taken safely taken shelter at the Chabad center. “Although everyone we know appears to be safe, we are sad to report that there are many more casualties in Nepal again today,” he said. “There is so much more work that now needs to be done.”

A few hours after the quake Chabad of Nepal published on its Facebook page in Hebrew a list of the whereabouts and condition of Israeli and other foreign tourists, backpackers and volunteers in Nepal who they have been in contact with.

Only a few days ago, with monsoon season fast approaching, Chabad of Nepal was working feverishly to supply thousands of Nepali people with sturdy tents that will be able to withstand the annual gush of rain and pounding winds that are expected to hit the country, which was still recovering from the massive 7.8 earthquake less than two weeks ago. Today’s quake, they say, only makes that effort even more urgent.

To help with the earthquake relief effort, visit the special relief fund page:www.Chabad.org/Nepal.

This report will be updated as more details become available.