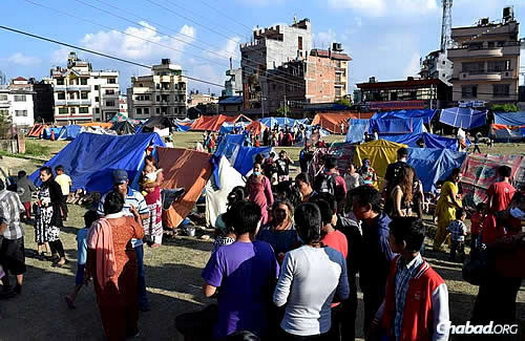 Given the devastation already being felt in Nepal, the fear is that without sturdy tents, the upcoming monsoon rains could make life even more unbearable for local residents.

With monsoon season fast approaching, Chabad of Nepal is working feverishly to supply thousands of Nepali people with sturdy tents that will be able to withstand the annual gush of rain and pounding winds that are expected to hit the country, which is still recovering from a massive 7.8 earthquake less than two weeks ago.

Monsoon season typically starts in June and runs through September. Given the devastation already being felt, the fear is that the rains could make life even more unbearable for local residents, many of whom have no homes to return to.

“There are dark clouds gathered in the skies above Kathmandu,” reports Chani Lifshitz, co-director of Chabad of Nepal with her husband, Rabbi Chezky Lifshitz. “Just thinking of what the impending rains will do to those living in makeshift tents makes your heart tremble.”

To that end, Lifshitz and a band of volunteers—many of them Israeli—are going from camp to camp distributing water, food, medicine, warm clothing, and most of all, waterproof tents.

While she cares for the living, other staff members at Chabad, including her husband, have been charged with the grim task of dealing with the dead. Rabbi Chezky Lifshitz and British volunteer Yehuda Rose have been working almost nonstop—with the help of foreign embassies and the families of those still missing—to identify and honorably transport home any Jews who died as a result of the quake.

On Wednesday morning, they announced that they had identified and returned the remains of two Jewish German nationals, having worked closely with German rescue teams and diplomats to ensure a proper burial.

As of Thursday, the rabbi reported that as many as 170 Westerners remain missing, among them Jews, though they don’t have an exact number.

The Lifshitzes have also been meeting with foreign officials who are in Nepal to assess the impact of the earthquake on the nation’s infrastructure, as they continue to focus on international and local recovery efforts.

Ilan Shohat, the mayor of Tzfat, Israel—whose city has twice been devastated by earthquakes in past centuries that killed thousands—is on a fact-finding trip to Nepal to learn more about the impact of the earthquake, in addition to the short- and longer-term steps towards recovery.

Shohat spent some time at the Chabad House, participating in a Lag BaOmer celebration, and spoke to aid workers and travelers who remained behind to help. One thing he saw firsthand among the Nepalis is that for those who survived the quake and its aftermath, the need for humanitarian aid grows more necessary by the day.

“There are long, long lines of people waiting to get what they need to keep body and soul together,” says Chani Lifshitz. “The thirst is unbelievable. When we bring water, they literally fall upon us. Our volunteers are working hard to give them what they need, and it’s so important that we get them adequate shelter before the rains come.”

Chabad of Nepal is collecting donations to help purchase much-needed supplies, especially tents, before the monsoon season hits. To help with the earthquake relief effort, visit the special relief fund page:www.Chabad.org/Nepal and indicate that the donation is for tents.