« Video Gallery: Lag Ba’omer Through the Years
Picture of the Day: ‘He Merited to See the Lubavitcher Rebbe’ » 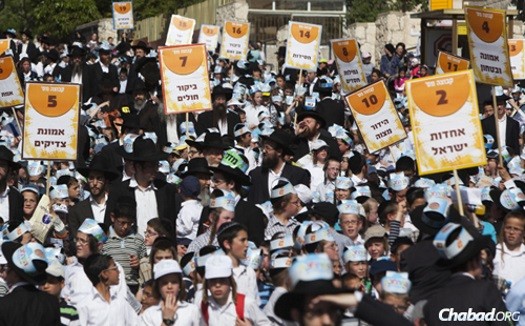 Tens of thousands of Israeli children from all walks of Jewish life—and from the entire range of Torah observance—look forward to taking part in Lag BaOmer parades like this one in Beitar Ilit.

There is a special hum that begins to vibrate throughout the Land of Israel in the days preceding Lag BaOmer. In each big city and small village, in every neighborhood and street, boys can be seen toting wood to gather into piles for the bonfires they will be lighting, while girls get their outfits ready for the big parade.

For Chabad-Lubavitch emissaries, these are hectic days, filled with preparations from sunrise through late into the night, as they put the finishing touches on events both adults and children look forward to every year on this special day. There are parades and raffles to organize, toy bows and arrows they know the kids can’t wait to get their little fingers on, fliers to distribute, and notifications to publicize on social networks so that everyone will know where and when to come, and how to get there. And, of course, this being Israel, city officials must be contacted to allow these gatherings to be not only legal, but safe.

To instill a sense of Jewish pride in each child and to awaken a love of every fellow Jew, the Lubavitcher Rebbe—Rabbi Menachem M. Schneerson, of righteous memory—initiated the Lag BaOmer parades in 1953. Whenever the day fell on Sunday, he would address the children himself from an outdoor podium in front of 770 Eastern Parkway, Lubavitch World Headquarters, in the Crown Heights neighborhood of Brooklyn, N.Y.

Different ‘Ta’am’ in Each Community

In Israel, Lag BaOmer, which begins on Wednesday night, May 6, and continues through Thursday night, May 7, is a day set aside for celebration, and as such, public schools are closed. Tens of thousands of Israeli children from all walks of Jewish life—and from the entire range of Torahobservance—look forward to taking part in them.

In addition to the parades, children throughout the country, from the north to the south, look forward to carnivals sponsored by their local Chabad centers. There, they can watch theatrical performances, take part in raffles and win prizes, and enjoy all kinds of entertainment geared just for them. The events are so much fun that parents are only too happy to participate in them as well.

Lag BaOmer marks the 33rd day of thecounting of the Omer, the biblical commandment to count the 49 days between Jewish people’s departure from Egypt on Passover and their receiving the Torah at Mount Sinai on Shavuot. Certain mourning practices are in effect during this time to commemorate the passing of 24,000 students of the great sage, Rabbi Akiva, who were struck by a plague. Nails are not pared, hair is not cut, beards go untrimmed, music is not sounded, and weddings and other joyous events do not take place.

But on the 33rd day of the Omer, Lag (the number represented by the two Hebrew letters lamed and gimmel that comprise the word), the plague ceased. And so, on that day, mourning is replaced by a total rejoicing. It is also the day that the passing of Rabbi Shimon bar Yochai (known as the “Rashbi”), author of the Zohar, the seminal work of Jewish mysticism, is celebrated with great joy. And it is the day that the Rashbi instructed the entire Jewish people to celebrate Jewish unity and love for one another.

While celebrations will be taking place throughout the country, each community has its own ta’am, or “flavor.” In Meron, where half a million people gather, Rabbi Yosef Yitschok Halperin—co-director of Chabad Meron with his wife,Chana Ruth—helps to oversee 10,000 children marching during the parades that take place throughout the day, punctuated by theatrical performances that tell the story of the Rashbi and Rabbi Akiva, with voices united in song. Giant screens showing video clips of the Lubavitcher Rebbe speaking about what Lag BaOmer means for Jews—for young and old alike—play throughout the night and day. Gatherings for Torah learning take place continually.

Because of the lifting of the ban on haircutting on Lag BaOmer, more than 1,000 3-year-old boys pass though Meron each year in order to receive their upsherin, or first haircut, signifying their rite of passage into the world of Torah learning with their older brothers and fathers. Booth after booth provides access to books of learning, as well as opportunities to don tefillin.

Tel Aviv has its own special advantages and challenges. Rabbi Yitzchok “Itche” Beer, program director of Merkaz Chabad Lubavitch in Tel Aviv, explained how more than 10,000 children gathered last year in the city, with signs bearing slogans such as calls to keep mitzvahs and to observe Torah. Together, they declared loudly: “We want more Judaism in Tel Aviv!”

The thousands of children and their parents attended the main rally in Tel Aviv, marching from Gan Meir to Ginat Sheinkin, escorted by police who closed the main streets of the city to traffic. One of the municipality’s senior officials, who attended the parade with his children, remarked that “only Chabad can unite children with long peyos with children with earrings, getting them to sit down together, recite ‘Shema Yisrael’ and march together in a parade.”

In Hebron, Chabad is again sponsoring the annual community bonfire-lighting on top of Tel Rumeida overlooking Me’arat HaMachpela (Cave of the Patriarchs). In the early 1900s, Rabbi Shalom DovBer Schneerson (known as the Rebbe Rashab), the fifth Chabad Rebbe, requested that Chabad sponsor the lighting of the main bonfire in celebration of Lag BaOmer. In honor of the Rebbe Rashab’s wishes, the evening begins with a torch-bearing traditional Lag BaOmer parade from the Tomb of the Patriarchs up to the bonfire site.

Rabbi Danny Cohen, co-director of Chabad of Hebron with his wife, Batsheva, exuded enthusiasm as he told of how the community of the traditional Jewish enclave there unites with its newer addition in nearby Kiryat Arba, so that even though each community has its own parades and events at night, during the day they come together. That way, the 500 or so children and their parents unite their voices and march together, adding a new dimension to the concept of Jewish unity.

And so, whether in an upscale suburb, a small community in the south, or the spiritual magnets of Meron, Hebron and Jerusalem, Chabad manages year after year to bring to fruition a central message of Lag BaOmer, as written in Psalms 133:1: Hinei ma tov u’ma na’im, shevet achim gam yachad (“Behold, how good and in the spirit of how pleasant it is, when brothers dwell together”).

« Video Gallery: Lag Ba’omer Through the Years
Picture of the Day: ‘He Merited to See the Lubavitcher Rebbe’ »