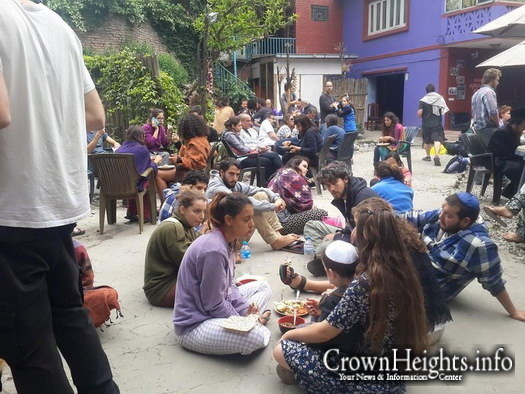 Backpackers and tourists at the Kathmandu Chabad center after the quake. Afteshocks continued into the night.

Hundreds of Israeli backpackers and tourists took refuge at the Chabad center in Kathmandu, Nepal, after a massive 7.8 magnitude earthquake devastated the capital city shortly before noon on Saturday. Some were given emergency medical treatment there as emissaries and volunteers worked frantically to help locate the missing, and to provide food and shelter to the stranded. Nearly 1,800 people have been confirmed killed, with thousands more inured and missing.

The quake’s damage reached Mount Everest and beyond, setting off landslides that killed at least 18 mountain-climbers, and trapped hikers and backpackers at the start of the climbing season. There are currently no known Israeli deaths from the catastrophe, according to the Israeli Foreign Ministry and the Lifshitzes, though as many as 200 remain unaccounted for as the death toll continues to climb. Fatalaties have also been reported in China and India.

Chani Lifshitz, who co-directs Chabad of Nepal with her husband, Rabbi Chezki Lifshitz, said in a video posted to their Facebook page that a few hundred people had taken refuge at the center, which was slightly damaged by the quake. She tried to reassure loved ones in Israel and abroad. Thousands of Israeli backpackers and foreign tourists—many of them in their 20s—pass through Nepal and the Chabad House each year.

“We’re trying to calm everyone,” she said, noting that they were experiencing aftershocks even as she was in the midst of recording the video.

Working closely with the Israeli Foreign Ministry in Nepal, emergency medical treatment to the injured was given at the Chabad House by backpackers who served as medics in the Israel Defense Forces and from local volunteers. The injured were later moved to the Israeli embassy, which is working to provide Israelis in Nepal with a means to return home. From Israel, planes were flying medics and others to the embattled area to help with search and rescue.

Satellite Phones a Link to the Missing

Only weeks earlier, Chabad had provided a number of hikers with satellite phones so they could be reached in an emergency, and those phones provided a key link to some of the survivors after the quake.

Liav Zakai, whose son Shahar is a backpacker stuck in a trek in Kyanjin Gompa in Nepal, told Ynet Israeli news service that at least 13 Israelis and other nationals were aground in a village area that was completely destroyed in the quake. Zakai said the Israelis—texting home using his satellite phone—reported some locals from their group were killed.

The phones are linked to a computerized system at the Chabad center to locate users. The Lifshitzes were working throughout the night with volunteers and authorities to contact or at least provide locations for those still missing.