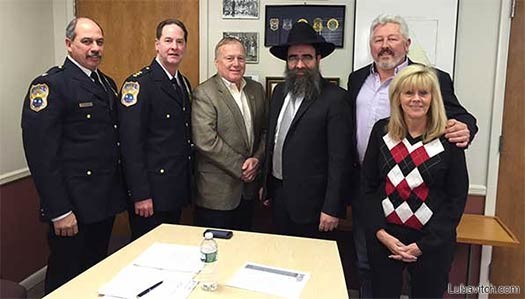 At his induction ceremony as Chaplain to the Port Washington Police Department, Rabbi Shalom Moshe Paltiel told Police Chief James Salerno and the attending officers that while he tries to teach about a G-d fearing society, “You actually make it happen.”

Port Washington is a small town where everyone knows each other. People are neighborly and quick to help each other out. The police department is involved in the day-to-day life of the local community, and the warm rapport works both ways: Police participate at local events such as Chabad’s menorah lighting, and they enjoy use of the newly constructed Chabad gymnasium for their weekly basketball game.

There are some 13,000 Jews in Port Washington, but Paltiel wants to reach all of the town’s 40,000 residents, and his new position, he believes, will make his work easier. “This was a big part of the Rebbe’s vision, to bring light, oneness and goodness to the world, for we are all G-d’s children.”

Crime in Port Washington is low, but kids and teens do get into trouble, the rabbi says. “This includes even kids from families that are well to do.” It is important, he feels, to teach children and youth that “there is a G-d, there is an eye that sees and ear that hears all that we do.”

With the new appointment, Paltiel’s persona is enlarged; children in the youth congregation are proud that their rabbi is now chaplain of the police department, and Paltiel expects to use the advantage well. “It will make it easier for me to connect with them and transmit Jewish values to them.”

As for the police, he’d like to see their good work get more notice: “You guys are partners with G-d in making this a peaceful place,” he told them gratefully.