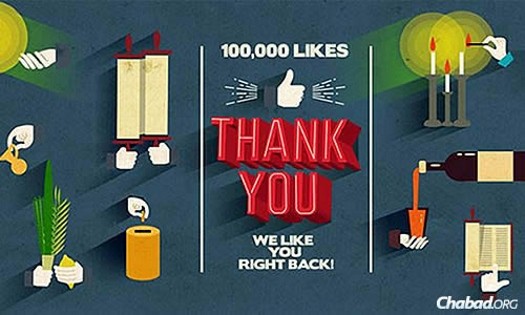 Tuesday, Feb. 3 wasn’t just any day for the Chabad.org Facebook page. For one, it was the start of 15 Shevat that evening—the New Year of the Trees. If that wasn’t enough to celebrate, that same day also made a bit of Chabad history: It counted 100,000 followers who had clicked the “Like” button.

The milestone highlights Chabad.org’s ongoing role in current and emerging platforms to reach people around the world.

“Thank G‑d, we’ve been blessed with an engaged community—100,000 people who want to learn, want to share and want to explore Judaism online,” says Rabbi Mordechai Lightstone, the 30-year-old social-media editor at Chabad.org. “I think it’s a chance to reflect on how connections are made and what more can be done moving forward.”

Launched in the fall of 2009, the popularity of Chabad.org’s Facebook page has been organic, spurred on by its content and the creation of its own cohesive, modern visual style. “It’s something people are really enjoying,” says Lightstone. “They keep coming back for more.”

The page is home to a variety of attractive content: photos with captions describing Jewish holidays and life lesson, inspirational quotes and daily doses of text, kosher recipes and, of course, breaking news and stories about substantive Jewish issues in every part of the world.

The Facebook page has also focused on art and aesthetics, offering Shabbatand holiday messages—“Shabbat Shalom,” “Shavuah Tov,” “Chag Sameach”—that audience members can share with others with a few quick clicks to their friends.

Especially popular videos have included one about how to put on tefillin, and videos documenting public menorah-lightings during Chanukah, from Moscow to Washington, D.C. “The Chabad-Lubavitch global network of emissaries is an endless resource that is continuously been tapped for rich and abundant content to feature on Facebook,” says Lightstone.

From good old-fashioned radio in the 1960s to satellite in the 1980s, and the early adoption of the Internet in the `90s, Chabad throughout the years has used various media to reach people looking to learn and grow Jewishly. Those involved on its social-media team work to share different styles and how to expand.

“It’s a team effort. It’s grown over the years, keeping up with the evolvement of all aspects of social media,” according to Lightstone. In fact, “Chabad.org has put special emphasis in expanding its presence on Instagram, attracting more than 1,000 new followers in the last few months.”

“Each platform features its own style, content and tone, so people have a reason to check in on and engage with them all,” explains Lightstone. “All of that really goes back to the idea that it’s not so much about the platform as it is about the people. We’re going to use the platform, of course, to speak the language of the platform, but the end goal is to connect with people. If that’s where they are right now, then we’re right there with them.”

That, in fact, defines the focus of the Chabad.org website as a whole; the Facebook page can be seen as a natural extension of a comprehensive and popular online presence.

When the Chabad.org Facebook page hit 100,000 “Likes” and posted a “Thank you” message to fans, the comments came rolling in. Traffic came in from the United States, Brazil, Israel, Canada, the United Kingdom, Mexico, South Africa, Australia and France, just to name a few locales.

Miami, Fla.-based Lisbeth Perez-Gentry said simply: “Thank you for being there to teach and answer questions.”

Andrew Black of Sheffield in the United Kingdom said he “knew virtually nothing only six months ago,” and that his spiritual growth has been deeply enriched by the daily posts, which he calls “invaluable and a great inspiration to me.”

“I find myself checking the Chabad page several times a day, work permitting,” explained Black. “I’m proud to be counted with the ‘Likes’ for Chabad.org, as I feel that in learning and sharing the information on their page, I am in a small way helping to increase Torah understanding.”

Others noted that the Facebook page has reignited certain aspects of their Jewish observance, with men being prompted to wrap tefillin after years of not doing so, and women reflecting on their own roles, including lighting Shabbat candles.

“Our hope is to continue to grow,” stresses Lightstone, “and to inspire others to use social media as a source for Jewish engagement and study as well.”