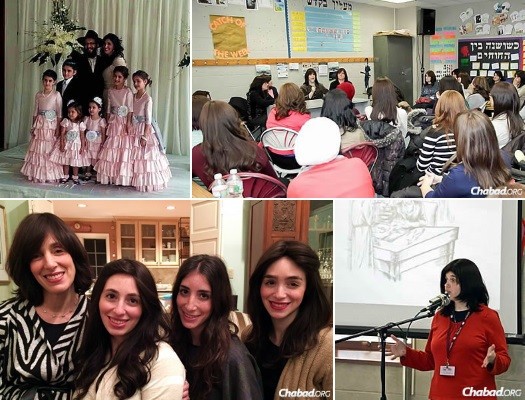 It’s a family affair, albeit for the female side of the family. Thousands of women and girls from around the world will gather in New York for the annual Kinus Hashluchos—the International Conference of Chabad-Lubavitch Women Emissaries—with many mothers and daughters in attendance together.

The four-day program will take place from Thursday, Feb. 12, through Sunday, Feb. 15. It commences with a workshop and welcome session, and concludes with a gala banquet that will be broadcast live Sunday night on Jewish.tv

“I hope it will give them a dose of inspiration,” said Dassie New, who has co-directed Chabad Lubavitch of Georgia and Congregation Beth Tefillah in Sandy Spring, Ga., a suburb north of Atlanta, for nearly 30 years. New, who has nine children, will be attending the Kinus with three of her grown daughters.

“I want them to come away feeling deeply connected to the Rebbe [Rabbi Menachem M. Schneerson, of righteous memory], to his teachings and to all the other emissaries who will be there. To appreciate what a full and meaningful life they have as Chabad shluchos, and thereby have the ability to inspire others back home.”

As far as her own experiences at the women’s gathering, New has been attending since the program began more than two decades ago.

“I cannot get enough of those personal stories—the letters and directives that different shluchim, Chassidim, received from their Rebbe,” she said. “I also enjoy the collective sessions where you are sitting with 3,000 women all doing the same thing as you, united as one. It’s powerful.”

She added that “having my children together with us as shluchim is a gift the Rebbe gave us that I feel forever grateful for.”

Her daughter, Sarel New, 19, attended the children’s version of the Kinus in the past, and then the young women’s program in high school. This will be her first year going to the women’s Kinus with her mother and two older sisters.

“I feel honored to be able to be there,” she said. “As a kid, it was one of the most exciting times of the year to be able to join so many Chabad girls and be together for the weekend. I didn’t usually get to be with them.”

One of the lasting results of participating? “The inspiration lasts throughout the year.”

Of watching her parents work as shluchim, she said: “They were great role models and gave of themselves. They were—and are—always there for everyone in the community. And I always felt like they were there for us, their children, as well. It’s amazing that they could have two completely full-time jobs and do both amazingly. That’s what I strive to be like.”

A first-year teacher at the Chaya Mushka Children’s House, a Montessori-style preschool run by her mother, she looks forward to attending the education sessions and workshops, and to hear what others have to share during the conference.

“My favorite part is the banquet and feeling that energy of so many shluchos all in the same room,” said Liba Leah Gurary, another of Dassie New’s daughters, who will be attending the conference for the eighth year in a row. Gurary, who has two young children, co-directs the Chabad Israeli Center in Atlanta with her husband, Rabbi Menachem Gurary. “It is so special to experience it with my mother and sisters. It makes it even more fun and memorable and inspiring to be able it share it with them.”

New’s daughter Chaish Mentz, 24, oversees the Judaics program at Chaya Mushka Children’s House Elementary School, which runs from first through sixth grade. She is married to Rabbi Levi Mentz, who teaches at the school; they have a 10-month-old son. This is her second year going to New York for the Kinus.

“I feel honored to get to be a part of this program, and share it with my mother and sisters,” she said. She also hopes to bring back advice and inspiration from the workshops and from simply conversing with all of the other women there.

‘A Sense of Purpose’

The word kinus is Hebrew for “gathering.” The Kinus Hashluchim, or International Conference of Chabad-Lubavitch Emissaries, is an annual event that takes place in November, when thousands of men gather to share inspiration, ideas and goals, leaving rejuvenated and ready to carry on their work with renewed vigor and enthusiasm. The same goes for the shluchos, the women, in February.

The first such conference began in 1991. It is timed to coincide with theyahrtzeit (anniversary of passing) of the Rebbe’s wife—Rebbetzin Chaya Mushka Schneerson, of righteous memory—whose concern for and interest in the shluchim and shluchos was legendary.

Since 1995, a special program has been offered for the children of emissaries. The Rebbe considered them to be not only “children of shluchim,” but shluchim themselves, playing an integral part in their parents’ mission. The girls’ Kinus takes place in tandem with the Kinus Hashluchos, and the boys’ conference takes place alongside the men’s conference.

Dina Eber co-directs Chabad Jewish Center of West Pasco in Trinity, Fla., with her husband, Rabbi Yossi Eber. They have six children, including two sets of twins. Eber will be attending the conference with her oldest twin daughters, Hana and Zelda, age 10. Because they live so far from an established Jewish community, the girls learn online daily.

“They want the chance to get to see their teachers and friends from their online school,” she said. “And being around all those Chabad girls will be very uplifting for them.”

Her daughters will attend the children’s part of the program, which includes workshops and activities geared specifically for girls. Eber said they are “extremely excited.” Their classmates are coming together from far-flung places like Turkey, Chile and the Dominican Republic, and one of their teachers is flying in from Jerusalem.

“They will get to experience real-life social interaction with their online classmates,” said Eber. “It helps instill conviction and pride in why we live here away from a big community—a clear sense of purpose and belonging. And we get to be reminded that we are part of something big and beautiful.”