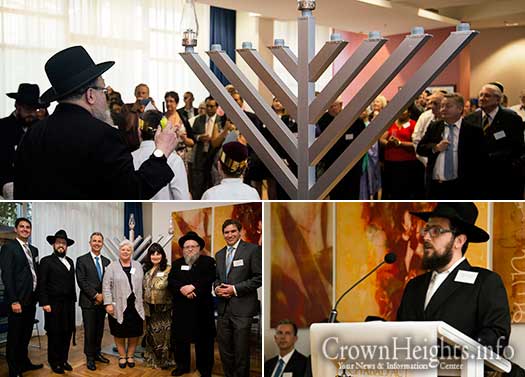 Chabad ACT, led by of Rabbi Shmueli Feldman, organized a menorah lighting and cocktail function in the ACT Parliament marking the first night of Chanukah.

The event was attended by members of Canberra’s Jewish community and a large representation from Canberra’s major faith groups and community organizations. ACT politicians from both sides of government were present as well as members of the diplomatic corps. Amongst them were ambassadors from several countries including Israel, Argentina, Romania, Hungary and Laos.

Many of these key representatives amongst the more than 130 attendees in the parliamentary function room were exposed to Jewish culture and Chanukah for the first time. It is being recognized as one of the most diverse gatherings of Canberra’s interfaith and cultural leaders in recent times.

The formalities commenced with MC Rabbi Shmueli Feldman, praying for the victims of the terror attack earlier that morning and praying for the survivors and all of those affected. Rabbi Feldman spoke of how events of this type can in part be answered by adding light, goodness and kindness. The Rabbi also gave a brief introduction to the ceremony and of the festival of Chanukah and welcomed his parents who flew from Sydney to be a part of the historic event.

Rabbi Pinchus Feldman OAM, Head of Chabad NSW and Australia’s longest serving pulpit Rabbi then gave an outstanding invocation prayer highlighting how lucky we are to live in this blessed Australia and urging all Australians to strive to live peacefully together.

Mr. Harry Chaim Oppermann, a member of the Jewish Community and the Jewish representative to the Canberra Interfaith Forum then read out a greeting from the Australian Prime Minister which was sent in honor of the celebration. Mr. Oppermann then spent considerable time welcoming individually the various dignitaries, community and faith leaders in attendance.

The Deputy Leader of the Opposition Mr. Alistair Coe MLA who helped facilitate the initiative, spoke of the significance of all the different faith groups coming together in a show of unity and togetherness to celebrate shared values. Mr. Coe also spoke highly of Rabbi and Rebbetzin Feldman and Chabad ACT and the wonderful contribution they make to his electorate.

The speaker of the House, Ms. Vickie Dunne MLA welcomed everyone to the Legislative Assembly and congratulated the organizers of the historic event which brought together so many people from such diverse backgrounds. The Speaker moved the audience in extolling the virtues of Judah the Maccabi, one of her favorite heroes, in his heroic and courageous leadership during the Jewish revolution at that time in ancient Israel and the significance of eight candles on the Menorah.

Mr. Jeremy Hanson MLA, Leader of the Opposition, thanked both Rabbi Feldmans for their moving words and said how delighted he was to extend greetings on such a momentous and unique occasion. The Opposition leader spoke of how the shared values of common good and spreading light are crucial to a secure future for all Australians.

The Canberra Jewish Children’s Choir came to the front and with great inspiration the blessings on the Menorah were sung by Rabbi Shmueli Feldman melodiously with live musical accompaniment whilst the first candle was lit. The choir delighted those present with a beautiful rendition of Maoz Tzur.

Cocktails and gourmet finger food with latkes and donuts, Jewish traditional Chanukah delicacies, and Lechaims continued to be served with Jewish music in the background. Everyone had a truly enjoyable and uplifting experience. Chanukah menorahs, chocolate Chanukah coins and guides for the festival were gifted to everyone upon exiting.