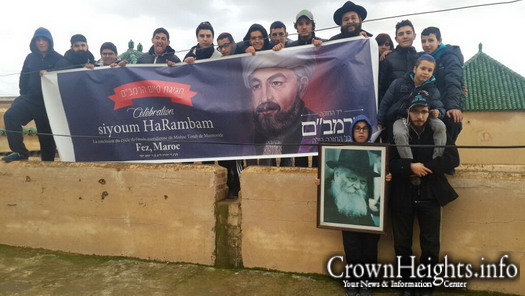 Armed with a Rambam and a bottle of mashkeh that the Rebbe had sent to Morocco, a group of Jews lead by Rabbi Levi Banon travelled to the city of Fez – a city where the Rambam resided and served as a physician – in order to hold a Siyum HaRambam and Farbrengen.

Rabbi Levi and Chana Banon serve as Shluchim in Casablanca, Morocco, which is approximately three hours travel from Fez. With the aid of two Shluchim – Yisrael Gabbay and Binyomin Bentolila – they arranged a Siyum HaRambam and a Farbrengen in the city.

The group said l’chaim with a bottle of mashkeh that the rebbe gave to Rabbi Yehuda Leib Raskin, OBM, the late head Shliach to morocco.

The Rambam was forced to leave Fez due to the Almohad rulers’ persecution of the Jews. He moved to Egypt, where he lived for the remainder of his life.