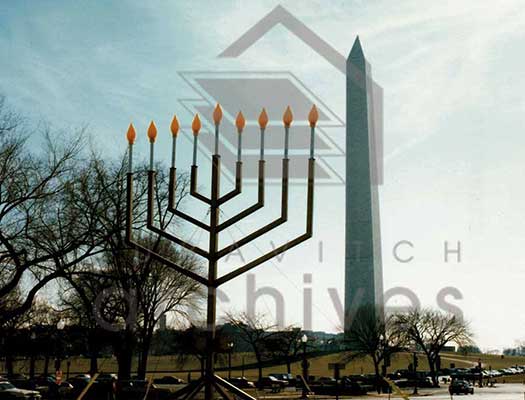 Debate raged in a small New Jersey town. It was 1980 and a large Chanukah menorah had been erected in the garden of the court house in Hackensack, New Jersey. The menorah attracted Jews and heightened the holiday awareness and celebration in the area.

By that time, public menorahs were on display in cities across the United States of America, including one in the nation’s capital, in front of the White House.

The following year, the Teaneck Jewish Community Council reached a unanimous decision opposing the erection of a similar menorah outside City Hall, which the local Chabad rabbi was planning to erect. They planned to raise the issue with the town council.

The local Chabad emissary responded that nonetheless he is planning to erect the menorah as permitted by American law. He continued to dedicate his time to planning the project.

Larry Jaffe, at the time a JCC board member, wrote a warm letter to the Rebbe, on behalf of the entire board, explaining their position.

“No doubt you have received my message in reply to your letter of Nov. 18 on the matter of placing a Chanukah Menorah on public property in Teaneck. For the record I will also reiterate here in writing, briefly at any rate.

“The subject matter in general is not a new idea requiring investigation as to constitutionality, public reaction, etc. All this has already been fully weighed years ago, resulting in overwhelming support for the idea, and in the actual erection of a gigantic Chanukah Menorah on public property in Manhattan, in the City of New York, the largest in the USA, also in Washington, the nation’s capital, as well as Philadelphia, the birthplace of America’s Independence. Chanukah Menorahs are on display in many cities throughout the Union.

“Thus it has been long recognized in the USA that the erection of a public Chanukah Menorah is a positive thing because of its universal message of freedom of the human spirit, freedom from tyranny and oppression, and of the ultimate victory of good over evil, just as “a little light dispels a lot of darkness.” These fundamental human aspirations and principles, as visibly symbolized by [the] kindling of the Chanukah lights, are surely shared by the vast majority of Americans.

“Indeed, so enthusiastically welcome has the public Chanukah Menorah been that its inaugurals have been graced by the personal participation of the President of the United States in Washington, and of the highest city and State officials and dignitaries wherever the Chanukah Menorah made its annual appearance.

“As an Attorney of Law you know, of course, the force of precedent, especially one that has recurred many times, in every court of law.

“Incidentally, the said public Chanukah Menorah has already become a familiar sight, since it has usually received good coverage by the media.

“Your personal effort in this matter is sincerely appreciated.

“With esteem and blessing,”

Upon receiving the Rebbe’s response, the JCC met with the town council who decided to prohibit the display of the menorah on public property.

The JCC then sent a letter to the Rebbe, dated December 2, 1981, outlining their objections to the menorah:

“When we began, Christian observances by the Township and in the public school system were common occurrences and offensive to Jewish children and their parents. Jewish children were excluded from most school wide activities because these activities (orchestra rehearsal e.g.) were held on Shabbat.

“Over the ensuing years, through our efforts, all Christian observances are out of the public schools. Jewish children now participate fully in whatever activities they choose. Most Christological symbols such as nativity scenes, Christmas signs along the highway through our town, etc., have been removed from town property.

“The placing of a menorah on township property may, at first, seem to be a positive act. The Jewish people of Teaneck would have a symbol of their holiday recognized by the township.

“However, because of the above history of our work in removing all the Christian symbols in the township, it would be ludicrous and ridiculous for the Jewish community to accept the presence of a Jewish religious object on township property.”

The Rebbe responded to the JCC’s letter on December 9. He expressed confusion regarding the comparison of lighting a menorah on public property to teaching kids in public schools about other religions:

“Because of the time element involved, I hasten to reply via S.D. [special delivery], although my reply at this point is only preliminary. The reason for this is that the matter of placing a Menorah on town property, which seems to have been made an “issue” in your community, is not a new idea, or a new problem – constitutional, legal, proper, or otherwise – that has to be weighed and determined. The fact is that there are numerous precedents over the years in various parts of the U.S.A. To mention a most conspicuous one is the public lighting of a Chanukah Menorah on public property in the Nation’s capital. It was in 1979 that a huge Menorah was installed in Lafayette Park, across the street from the White House, with President Carter personally participating in the ceremony Like all matters relating to the president of the United States, this event, too, received wide national coverage. Since then, the Menorah in Washington has become an annual event.

“Let me emphasize that the Menorah in the Nation’s capitol was introduced without anyone making an issue of it, as a self-evident event in the public interest. That it was also constitutional, legal and proper goes without saying, since the president of the U.S. personally participated in it.

“I must confess that failure to take account of the above by the J.C.C. has left me perplexed and amazed. After receiving a clarification of this point, I will be able to address myself to the contents of your letter.

“With esteem and blessing for a bright and inspiring Chanukah,”

The Rebbe instructed Rabbi Brod to cease his efforts to erect a public menorah in Teaneck and focus on the New Jersey State House. Without any debate, the menorah was erected there and the Governor attended the ceremony.

An excerpt from Dear Rebbe: The Famous and Unknown Correspond with Rabbi Menachem Mendel Schneerson a project of Hasidic Archives.