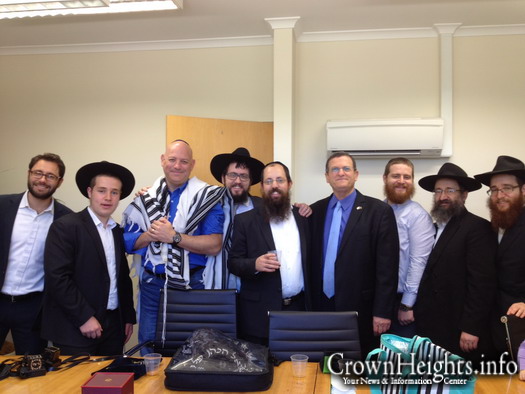 The Israeli Ambassador to Australia, Shmuel Ben Shmuel, together with the Deputy Ambassador to Australia, Meir Yitzchaki, put on Tefillin in honor of the victims of the recent terrorist attack in Jerusalem. This took place during a minyan at the Embassy of Israel, organized by Rabbi Shmueli Feldman, Chabad’s representative to Canberra, Australia’s capital city.

Rabbi Feldman moved to Canberra with his family in early 2013 to run Chabad of the Australian Capital Territory (ACT) and to serve as the only Rabbi for the Jewish community in the ACT and surrounds.

Kaddish was said for the victims of the terror attack and an additional prayer was recited for the wounded and for all of the Jewish people in the Holy Land and the Diaspora.

Rabbi Feldman was accompanied by Rabbi Mendel Raskin from Chabad of Bentleigh in Melbourne, who was visiting Canberra with his family for the Bris of their newborn grandson. Rabbi Schneur Zalman and his wife Feige Raskin, the parents of the newborn, recently moved to Canberra with their family to be active members of Chabad ACT’s growing Jewish community in Australia’s Capital. Rabbi Mendel Raskin performed the Brit for his grandson, who was named Sholom Dov-Ber.

The Ambassador and other Embassy staff were visibly moved when it was explained that this minyan was a response to those who wished to stop our prayers in Jerusalem. Rabbi Shmueli Feldman said “The terrorists stopped our minyan in Jerusalem last week. Our answer is that we will pray with even more determination and cause as many others to put on tallis and tefillin and pray as well. We will not be stopped, nor will we be deterred from practicing our Jewish faith freely wherever we may be in the world. The message His Excellency the Ambassador is showing the world is, that we will continue even stronger and the light of our mitzvos will ultimately prevail over the darkness of the world.”

The Deputy Ambassador pointed out that the slaughter in Jerusalem took place whilst the Jews in the synagogue were reciting the most important prayer of Shema Yisrael. Mr. Shmuel Ben Shmuel then emotionally led the the Shema Yisrael wrapped in the Tallis and Tefillin together with all those present.

The gathering concluded with everyone sharing a L’chaim and candies, compliments of Chabad ACT, and all the Rabbis gave blessings that peace shall reign in the Holy Land and throughout the world.”