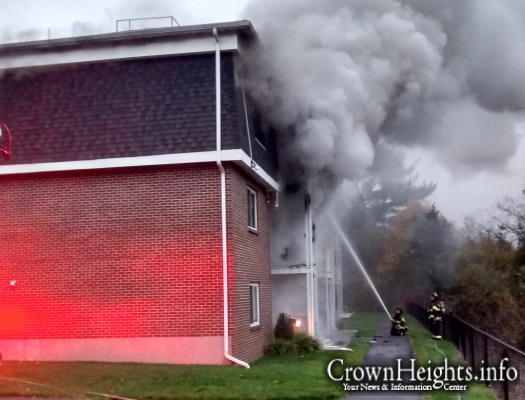 The morning after they arrived on their new Shlichus to Stoughton, Massachusetts, a fire destroyed the home of Rabbi Aizik and Mrs. Brochi Katzman.

The fire broke out at around 6:30am. “I heard loud noises from the apartment below me, but before I could go check what it was, the fire alarm sounded. I realized that I must get out of the building quick. I lifted up my 7-month-old daughter, grabbed my phone, and walked right out the door. There was already smoke in the stairwell, so I swiftly exited the building,” Rabbi Katzman told CrownHeights.info.

Outside the Shliach saw a young woman, who said to him “I don’t know what happened! The pan caught on fire, then the couch, and then it was everywhere!” The woman’s mother was injured in the inferno.

It was a three alarm fire, and altogether seven fire companies came to the scene.

The smoke and fire rendered the building uninhabitable, and much of the young shluchim’s property was damaged and will need to be replaced.

The Katzmans are committed to continuing the Rebbe’s Shlichus despite this unfortunate interruption, and are reaching out for the community’s help to recuperate from this disaster. To donate, please click here.