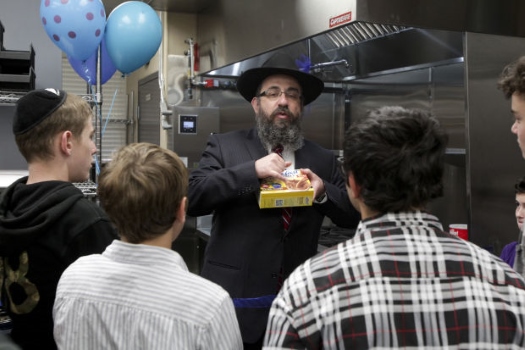 Shouts of “Mazel Tov” followed the ribbon cutting on a new, fully functioning kosher kitchen Wednesday at the Heritage School, a residential treatment center for teens just off University Avenue near the mouth of Provo Canyon in Utah.

The fact that it is the first fully functioning kosher kitchen nationwide for residential treatment centers, and that it is in Provo, makes it extremely unique.

“A kosher kitchen at Heritage is a historic event,” said Rabbi Benny Zippel. “It’s a life-transforming event that binds the student with God.”

Rabbi Zippel, executive director of the Chabad Lubavitch of Utah, explained the importance of having a kosher kitchen for the students. Zippel visits the school every other week and works with Chaplain Tami Harris when he is not available.

There are 17 Jewish students at Heritage. It was the parent of a former student that saw a need and took the challenge to get the financing for a kitchen.

Barbara Belsky from Skokie, Ill., outside Chicago, had a child at Heritage. At the time he was there it was hard for this Orthodox boy to eat kosher. The school tried with two hot plates, two crockpots, two microwaves, etc., but it really didn’t fit the needs of kosher eating.

“I got involved because I had a child who attended there,” Belsky said. “We’re Orthodox Jews and it was the only RTC with some kosher cooking. I called everywhere in the U.S. and it doesn’t exist. There were a number of children there from California that followed our dietary laws.”

So, Belsky set out to raise the money needed to have a full kosher kitchen.

“For us, keeping kosher is a basic part of being Jew,” she said. “Not having it was very upsetting. For some kids, it’s a big deal. It adds to a lot of anguish to tell them not to eat kosher.”

Belsky said she appealed to friends and family and to her synagogue community in Skokie and in a year’s time she had collected approximately $16,000 for the school to have a new Kosher kitchen.

Belsky said many Jewish parents in her community looked throughout the country for the best treatment centers for their children, but even in New York there wasn’t anything like what Provo has.

“We like the religiously minded atmosphere,” Belsky said. “I’ve looked at some schools and couldn’t tell the difference between the students and the teachers.

“The school (Heritage) was very supportive. This is a school that cares enough about it.”

Belsky said her son was discharged before the kitchen was done, but the project carried on.

“One of the greatest things about today is how two communities worked together to make the kosher kitchen happen,” said Chaplain Tami Harris. “Barbara Belsky engaged the Chicago area Jewish Community to fund a kitchen halfway across the country for children they don’t know. Heritage pulled together to see that it happened with permits, bids, purchases, labor and vision.

“Staff at Heritage are from a variety of faith traditions, but every one of them has the desire to make the lives of their students better. For me, today was a day for a kosher kitchen ribbon-cutting, but also a day where religious liberty had a win.”

Zack Kornbluth, 15, sounds like an all-American boy, but he is from a small community in Israel, and he is an Orthodox Jew. Eating kosher is as much a part of his life as breathing. His experiences in the United States have often left him not being able to keep with his religious and cultural traditions.

“Hopefully this (new kitchen) will help,” Kornbluth said. “It is part of my religion. You’re eating stuff that is pure and holy so you can stay pure and holy. I’m excited for the kitchen.”

Kornbluth has been at Heritage for 15 months and is also taking Independent Study packets from Brigham Young University.  His hope is to be an engineer. He explained that while some meats are unclean as per the Bible, you can eat the meat from cows and lambs because they are innocent.

On the other side of the Jewish spectrum is Jordan Greenbaum, 13, from Los Angeles. He practices Reformed Judaism. While he was raised not to eat kosher, he is excited for the opportunity.

“I think it’s great. This is amazing,” Greenbaum said. “My mom’s mother had a kosher house. Eating Orthodox is a lot more involved.”

Greenbaum said his favorite meal is Veal Cordon Bleu. “That’s not OK to have. But I’m probably not going to eat kosher,” he said.

“I think this is really significant,” said Ella Ross, age 16. Ross is from the Los Angeles area and was raised in the Reformed Jewish tradition.

“Judaism is important to all cultures,” Ross said. “I was raised a little kosher, but it is really hard to live kosher.”

Although students from the Reformed or Conservative traditions don’t follow kosher living, they were all excited to see Rabbi Zippel and to know there are kosher options for them.

“You don’t have to worry about what you eat when you’re served Kosher,” Ross said.

The person that is going to have to worry is Alyssa Cundy, the foods service director at Heritage. She has been doing the kosher cooking for four and a half years at Heritage.

“You live, you learn and the Rabbi answers questions,” Cundy said. “I try to buy as much kosher for everyone.”

Cundy said serving the student body is cheaper when she buys kosher, and the side benefit is it is healthy.

Let’s get one thing perfectly clear, having kosher food doesn’t mean it was blessed by a rabbi.

Kosher means it is clean, and undefiled by the laws of God. Vegetables, fruits, meats and dairy all have their appropriate places. Some meat is considered unclean, as are some vegetables, and should never be eaten.

The use of grapes for instance has very intricate definition. Eating a whole grape is fine, but in cases of wine preparation there are specific rules. Multiple eggs when used in cooking, like baking a cake, should be broken individually. You add one to the mix, then break another. This way you don’t mix eggs with one that may have some blood in it. That is forbidden to eat.

“The Jew is to be actively engaged with God,” Zippel said. “It encompasses their life 24/7. They pray, study and eat as a Jew. They follow the dietary restrictions that are the laws of kosher.”

Those restrictions can become very detailed, but the most basic preparations include keeping meat completely separated from dairy. To mix the two would be to contaminate both. Hence, the kitchen has two each of ovens, stove tops, counters and preparation areas, utensils, microwaves, and hand towels, all things supplied in a kitchen doubled.

Dishes and pots that have been used for dairy and meat go through completely different wash cycles, with a cleansing cycle between. At the ribbon-cutting, Zippel took examples of prepared foods and explained what made them kosher, or not. Insignias on store-bought foods will indicate whether the food is kosher or not and if it has dairy or not.

For instance, some non-dairy coffee creamers aren’t kosher because there are small traces of dairy acceptable to the government standard, but not to an Orthodox Jew.

“I’ve never had a cheeseburger,” Zippel said. “You’d be amazed at how many products in the store are certified kosher.”