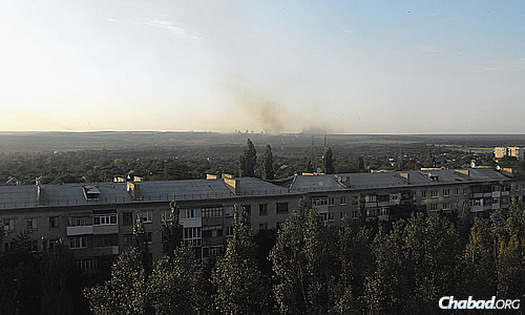 From the city of Lugansk, Ukraine, grad missiles can be seen fired in the distance, graying the skies and causing worry for city residents, including many Jews who have remained there.

In the November frost, two-dozen men gather for morning prayers at the only synagogue in Lugansk, Ukraine. They don tefillin, praying by the gray daylight shining in through the building’s windows and skylight. One man, Valodia, is fluent in Hebrew and reads from the Torah scroll for the quorum.

Before the war, morning prayers were held at 7 a.m., but now, with a citywide curfew that ends at 6 a.m.—and the synagogue cold and dark because its electricity has still not been reconnected—prayers begin at 9. It doesn’t make too much of a difference to the men who have gathered; they’re mostly pensioners, and if the war has left them with anything, it’s time. After prayers, a kettle is placed on the fire, and the group sits together drinking hot tea, talking and warming themselves by the fire.

“We have a minyan on Monday, Thursday and Shabbat,” says Igor, the gabbai, who assists in running the synagogue. “We survived the shelling and life without water and without light, so we can say that now it’s a bit better, although far from perfect, of course. Still, we can gather, read from the Torah—we even have our own Kohen—and now we see people coming to the synagogue who haven’t been here in a long time. People come because at the synagogue, the soul is warmed.”

While NATO announced on Wednesday that Russian tanks, troops and artillery have rolled into separatist-controlled territory in eastern Ukraine in recent days—and the Organization for Security and Cooperation in Europe’s (OSCE) warned that the situation is rapidly deteriorating—citizens of Lugansk and Donetsk have been attempting to return their lives back to normal, at least as much as they can.

The Jewish communities of both cities have tried to do the same.

“You can still hear the missile fire and shelling, and at night, it’s worse,” says Igor. “But for now, it’s all in the distance.”

A Humanitarian Crisis in the Making

Lugansk was one of the hardest-hit cities when heavy fighting began in mid-June, and much of the city was badly damaged in the ensuing rounds of rocket and artillery fire that emanated from both sides of the conflict. Thousands of its citizens fled, among them the majority of the approximate 7,000 members of the Jewish community. The city’s rabbi and Chabad-Lubavitch emissary Rabbi Sholom Gopin has since then been working to provide what he can for members of his community, both those in exile throughout Russia and Ukraine, and those who for whatever reason—mostly due to old age or illness—have remained in Lugansk.

Since the war began, Svetlana (who works for the Jewish community and asked she be identified only by that name) has been contacting and visiting Jews living in and around Lugansk, distributing financial and humanitarian aid transferred to her by Gopin.

During the heaviest days of the war, when the American Joint Distribution Committee’s (JDC) Chesed in Lugansk was not in operation, Svetlana and a small team of volunteers went door to door checking up on the elderly. She even traveled to Kharkov to get refills of medication desperately needed by the elderly. Since the resumption of Chesed’s activity in Lugansk in the beginning of October, Chabad and the local JDC branch have continued to work together closely.

The months of fighting were marked by little running water, electricity or mobile phone service in the city, but since late September, when active fighting in Lugansk itself ceased, most basic services were restored. These services remain spotty today, to say the least. Many private homes still do not have electricity, and citizens are advised not to drink or cook with the rationed water they get from the faucet for a mere few hours twice daily. Bottled water has more than doubled in price.

With cold weather fast approaching, the lack of heating is a growing concern. While those who have electricity—which can sometimes be disconnected for 24 hours or more without warning—can plug in portable heaters, those without that luxury must turn to other measures. A common method is heating bricks overnight on the stove, the bricks radiating some measure of warmth to the rest of the apartment.

“It works better in smaller apartments,” explains Igor, whose own home was destroyed during shelling in the summer and who now stays at the synagogue. “It’s not ideal, but it helps a little. It’s more complicated for people with electric stoves when there’s no electricity, however.”

As for the potential human consequences of a lack of stable heating in the coming winter months, Svetlana would rather not think about it: “This is the situation now. I don’t want to speak of what might be.”

Their Reasons for Staying

In recent weeks, fighting between the Ukrainian army and Russia-backed separatists has intensified, with some of the most intense battles surrounding Donetsk’s airport, which was built in 2012 for the Euro Cup and today is in shambles. Like Lugansk, Donetsk itself has also remained quiet, albeit only for the last two weeks.

“Right now, it’s calm and quiet in the city,” reports Rabbi Aryeh Shvartz, 31, who serves as an assistant to Donetsk’s chief rabbi and Chabad emissary Pinchas Vishedski, and is now charged with leading day-to-day life in the battered city. “Our daily minyan has continued, and the Jewish day school remains open. Those of us in the city don’t see anything getting worse; it seems like it has remained the same.”

Shvartz says if things get worse suddenly they will work to evacuate the school, and if need be, the rest of the Jewish community, but for now, life goes on.

Although it is mostly the elderly who have remained in both Donetsk and Lugansk, some younger people linger as well—those who are either ill themselves, or who feel that they cannot leave an elderly or infirm relative behind. Of those who are remain, many go to work, even though they are not getting paid.

“Pensioners can always fill their time doing errands and cooking, but the younger people feel they have to do something with their time,” explains Svetlana. “One man here told me that he goes to work and basically does nothing there. He says they all hope that when this situation normalizes, they’ll be able to keep their jobs, and maybe even get back pay.”

Asked why he has stayed in Lugansk, Igor replies that he has been helping Svetlana continue the Jewish community’s work, delivering aid and a soothing word to worried locals. His primary reason, however, is the commitment he has to his position as gabbai.

“Our Torah scroll remains here, I’m the gabbai, and I must stay here and guard it,” he insists. “We had three Torahs before the war; two have been hidden away, and one is still here. Its merit has saved us many times through all of this. If something happens, G‑d forbid, I need to be here to rescue it.”