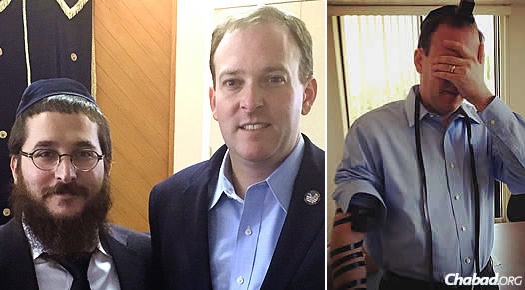 The 34-year-old legislator was assisted by Rabbi Motti Grossbaum of Chabad at Stony Brook in Suffolk County, N.Y.

Zeldin did this on the day he was vying for a seat in Congress, which he won, beating out incumbent Tim Bishop in New York’s 1st Congressional District to become the sole Jewish Republican in the U.S. House of Representatives.

This was not the first Election Day meeting between the rabbi and Zeldin. Longtime acquaintances, they got together at Zeldin’s campaign headquarters a few months earlier on the morning of the primaries to do the same.

While Grossbaum was adamant to steer clear of partisan politics and noted that he has friends on both sides of the aisle, he wanted to acknowledge the fact that Zeldin “took time on what was probably the biggest day of his professional life, to wrap tefillin.”

Congratulating the Jewish politician afterwards, Grossbaum wrote: “You recognize that as important as it is to do everything we humanly can to get a victory, we need G‑d’s blessing to succeed, both through a hectic campaign season, but more importantly, with your work now in Washington. … Jewish people across the country will be impressed and inspired by you.”

For his part, Zeldin responded by thanking the rabbi for his “prayers and support.”

That support goes both ways.

During Israel’s summer war with Hamas in Gaza, Zeldin attended a rally at the Chabad center on behalf of soldiers of the Israel Defense Forces. More than 100 people attended the event and prayer session, including Zeldin, who put on tefillin then as well.

As care packages were being prepared for the soldiers, Zeldin gave a short speech in which he stated that Israel and its leaders should know that “there are people here in America who stand with them. The challenges that Israel faces right now are so important. It’s beyond just achieving temporary peace.

“Israel is fighting for its stability, its security and its country for a very long time to come, and we must stand with them. Israel is our strongest ally in the entire world.”