« 2 of 3 Suspects in Brutal Mugging in Police Custody
Wheel Thefts of the Week: President and Carroll » 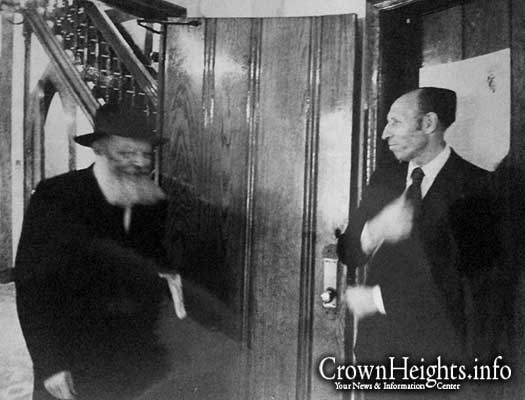 Pictured: Lieutenant Abraham Kushner greets the Lubavitcher Rebbe as he exits his room in 770.

After the passing of retired NYPD Lieutenant Abraham Kushner two years ago, his granddaughter who is active with Chabad at UNC Chapel Hill, brought a recently discovered photo of the Rebbe and Lt. Kushner to the Shluchim.

Kathryn (Blima) Kushner is a law school student at UNC Chapel Hill and is active in the local Chabad House which is directed by Rabbi Zalman and Yehudis Bluming. Little did Kathryn know that her family has a history and connection to the Rebbe.

Dr. Gary (Gershon) Kushner, Kathryns father, was recently visiting his mother in Florida and was going through old photographs when he happened upon the above photo of his father with the Lubavitcher Rebbe. Knowing of his daughters involvement with Chabad he gave her the photo and she in turn brought to her Shluchim and related the following about her grandfather;

Abraham Kushner OBM retired from the NYPD with the rank of Lieutenant. His illustriuse carrer spanned across 25 years of dedicated service. 11 of the those years were in the capacity of Liaison to the Jewish Communities, and was only the second ever at the time to serve in this position.

In his capacity as a liaison, Lt. Kushner played a vital role in protecting the Jewish people of New York City, working to keep an open channel of communication and maintain a positive relationship between the Jewish communities and the NYPD.

He came to know the Rebbe through his work executing these roles within the Chabad community.

« 2 of 3 Suspects in Brutal Mugging in Police Custody
Wheel Thefts of the Week: President and Carroll »