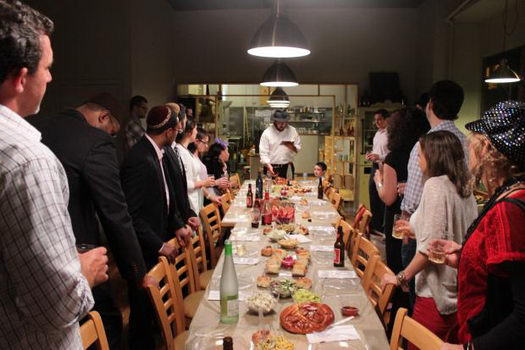 Children prayed and lit candles, a symbolic fish head adorned the dinner table and a rabbi blessed the food at a recent Rosh Hashanah communal dinner in central Brooklyn.

But this scene wasn’t unfolding in Crown Heights, long known for having a large Jewish population. Instead, it was in a far less-likely locale — Bedford-Stuyvesant — in what organizers called the “first-ever” communal Jewish holy holiday event in the neighborhood.

“Everything is spilling over,” said Rabbi Ari Kirschenbaum, who organized the dinner. “Bed-Stuy is now one of the hottest places to be.”

Though Bed-Stuy had a small Jewish population in the late 1800s, it has remained a predominantly black community for more than 100 years, and as of 2009, less than 1 percent of the population was Jewish, according to data from the Association of Religion Data Archive.

But as more and more newcomers move into the community, Bed-Stuy is becoming more diverse, and now some Jewish residents are looking for a way to practice their faith closer to home, Kirschenbaum said.

“Let’s put it this way: Bed-Stuy has never really been a Jewish neighborhood,” Kirschenbaum said. “[But] now you have an influx of young Jewish professionals that are part of the overall gentrification that’s happening, and that’s what makes it really exciting.”

Kirschenbaum, a rabbi at Congregation Kol Israel in Prospect Heights, said he started to hear rumblings from the community last year about putting together a holiday celebration in Bed-Stuy.

Part of his congregation was traveling from Bed-Stuy in order to worship.

“The chorus kind of got louder,” Kirschenbaum said. “‘Hey, we like your synagogue, and we like Prospect Heights, but we have our own identity.'”

While discussing his idea with business owner Ben Grossman, who co-owns popular central Brooklyn restaurants Peaches and the Smoke Joint, the two realized they shared a common goal. Grossman, who is Jewish, said he wanted to host the event.

“I have an 8-year-old son I do want to start to be invested in this religion,” Grossman said. “I thought this was a great opportunity to do so.”

On Wednesday night, more than a dozen men and women from around Brooklyn gathered at Grossman’s Pantry coffee shop, at 407 Lewis Ave., to eat pomegranate, the many seeds of which symbolized being fruitful in the new year, and to hope for a “sweet” new year by eating apples and honey — which, being in Brooklyn, Kirschenbaum joked was “artisinal honey, made on someone’s roof.”

Susan Silverman, who lives and works nearby as a realtor, said she was glad to see the celebration come to a neighborhood she’s seen evolve over the years.

“I’m very comfortable here,” Silverman said of her neighborhood. “It’s changed so much.”

Silverman, who said she is not very religious, nonetheless wanted to enjoy the cultural event in her own backyard. It’s that interest in Bed-Stuy, Kirschenbaum said, that lead him to plan the event, and has led to plans for Hanukkah, Sukkot and other celebrations going forward.

“It’s really done in a social setting where it’s more informal, less traditional, and because of that people feel very comfortable,” Kirschenbaum said. “They’re coming because they want to create something in their neighborhood. This is not the rabbi doing their appeal or having them come, and that’s what makes it more beautiful.”